In honour of the restoration of the Oxford-Bradfield-Cambridge triennial rotation for hosting a play delivered in Ancient Greek, we decided to offer the 1850 Society and their guests a ‘behind the scenes’ insight into staging this Summer’s Alcestis and the project that restored Bradfield’s iconic Greek Theatre. The event took place on Saturday 22 June, the day of the opening performance of Alcestis.

Sunshine graced this special occasion and the gathering started with refreshments and an Archive display of the Greek plays from the time of the attendees. 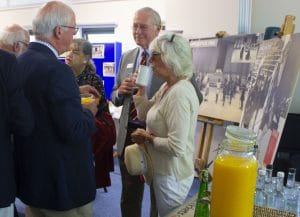 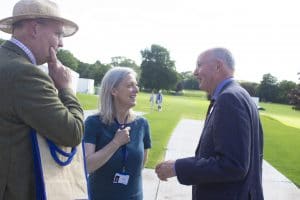 Eumenides, Timothy Rhodes (C 64-68). Attendees enjoyed scanning the grainy black and white images and the Chronicles for mention of themselves and their friends. We were also delighted to host Classicist Julian Spencer (D 70-74) as a guest, who was in the sixth form when Colin Burgess (SCR 72-18) arrived as a D House tutor. 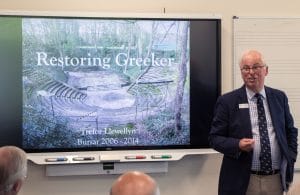 After a warm welcome from President Simon Dixon (C 58-61), 1850 Society member Trefor Llewellyn (Bursar 2008-2014) took on the lead role with his multimedia presentation on ‘Restoring Greeker’. Members commented that they found this exposé of the challenges and solutions fascinating, leading to an even greater appreciation of the achievement of this phenomenal restoration project.

Summoned by strains of Ancient Greek carried on the breeze, the 1850 Society made their way down to the  Greek Theatre viewing gallery and watched the final rehearsal in progress. Polly Caffrey and the key cast characters of Admetus, Alcestis and Pheres then joined the Society on the gallery to share their experiences of this year’s production of Alcestis. 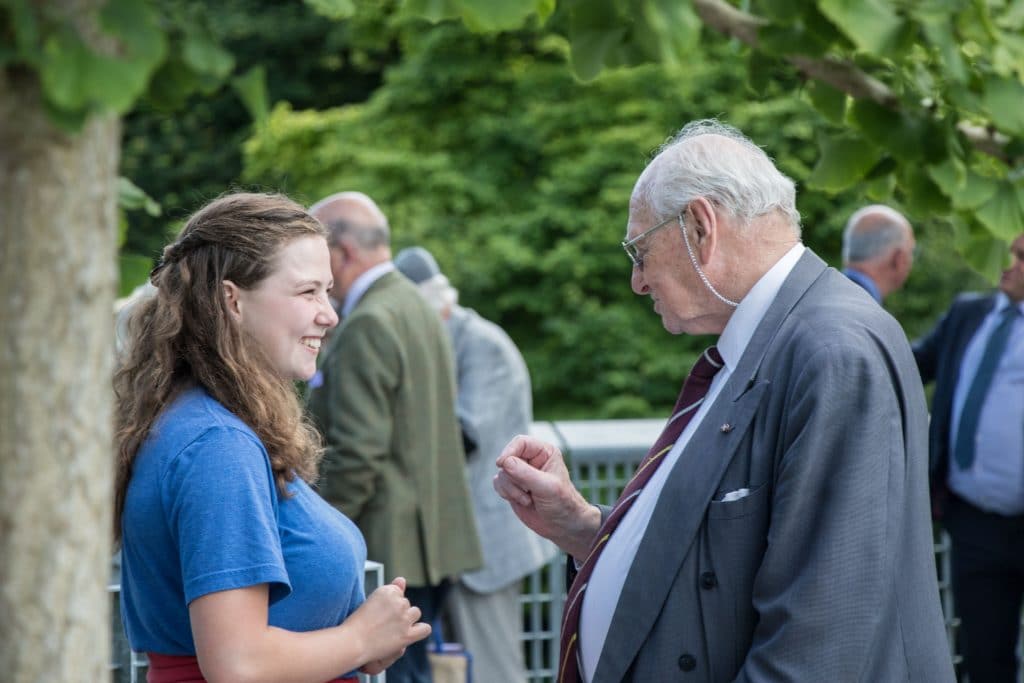 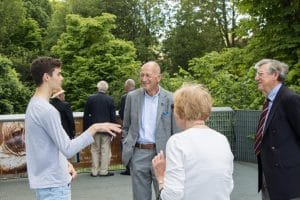 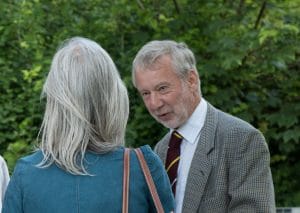 Having left the cast to their final preparations, some made their way to the Art Schools to view the carefully curated exhibition there. 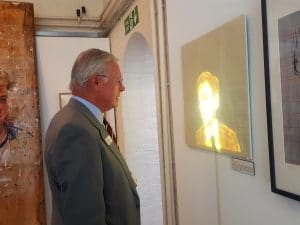 Simon Dixon – who attended St Martins College of Art – appreciated the display very much and commented on the massive improvement in the art facilities. The remainder headed to the Pang for a cooling walk along its shaded banks and to reminisce over fishing (and other) exploits.

Thereafter the 1850 Society gathering converged with the main Bradfield Society event in the marquee for afternoon tea and members had the opportunity to catch up with other old friends. 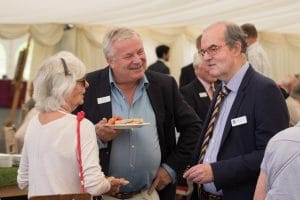 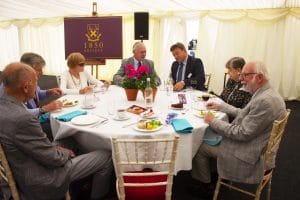 A lively crew then stayed on to enjoy the opening production of Alcestis, accompanied by some English Sparkling wine recommended by Will Lyons (H 89-94) at a Bradfield Society wine tasting event. Michael Bostelmann A (61-66) said that the production was ‘all Greek to him’, but greatly appreciated it nonetheless. 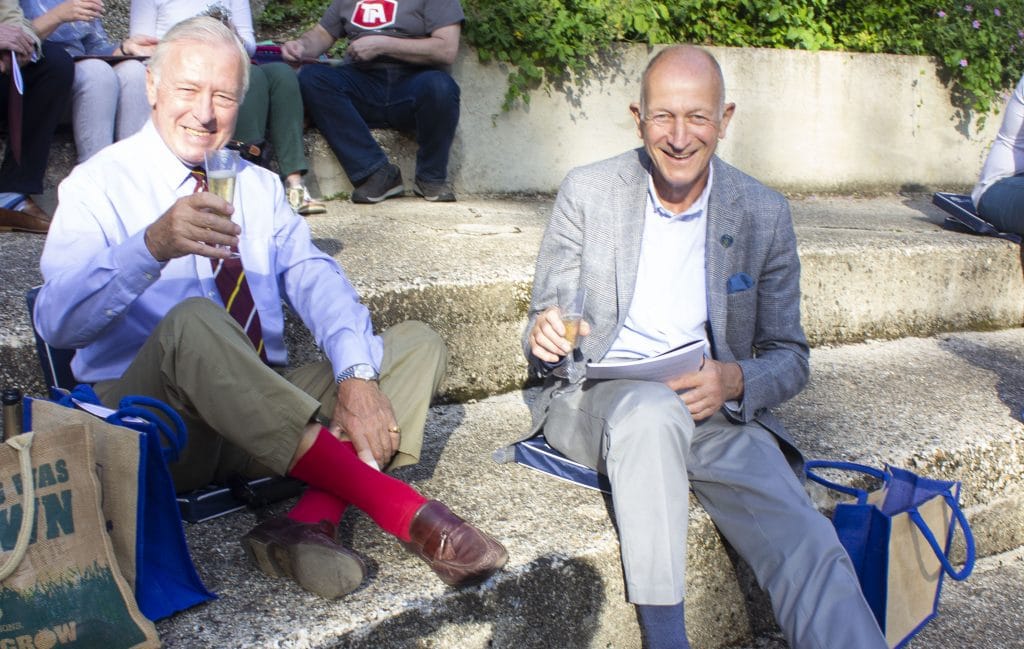 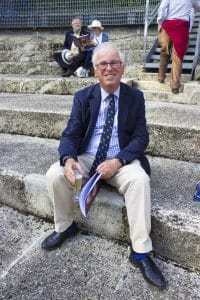 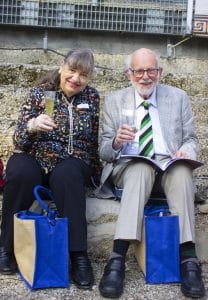 Trefor Llewellyn and Chrissie and Terence Brack (A 51-56) enjoying the Greek Theatre and the English sparkling wine!

John Muir (G 70-75) and his mum Janette delighted in the Bradfield grounds and the play – ‘just the most wonderful way to spend a Summer’s day’. 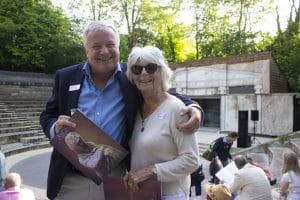 Friends and family were also welcomed at the gathering, and we were delighted to meet Janette, John Muir’s mum, Heather Rhodes, Patricia Plaskett and Chrissie Brack.

We are especially pleased that we were joined by Terence and Chrissie Brack and Timothy and Heather Rhodes for the first time, especially owing the long journeys they had to make in order to attend.

Many Thanks for Paul Armstong and Alex Hall from the Classics department for their help with hosting the day, to Polly Caffrey for allowing us to disrupt her precious final rehearsal, and of course to the cast members who went on to perform so well that evening.

More News
Recital to celebrate the restoration of the Chapel Organ
1850 Club Appeal Annual Review – We’re off to a great start
Greeker Saved: A Fundraising Legacy