2018 was a productive year for the Estates and Maintenance teams as they oversaw the completion of six major projects, each improving the Bradfield experience. Julia Bond, Capital Projects Manager, provides an insight into how these renovation and new build projects have transformed our campus. 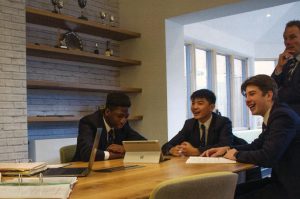 Loyd House gained both a significant extension and a refurbishment to improve the overall quality of the facilities and to create different spaces for the pupils to enjoy. The work included relocating the Common Room from the annex to sit at the heart of the House.  Overall, the House has now increased in capacity by 18%. Part of the challenge of the project was to ensure that the aesthetics of the building remained sympathetic to the original and therefore the contractor implemented similar dark brick patterns into the walls and windows. The result is spectacular, with the new building seamlessly joining the original. The project gained recognition at the 2018 Brick Awards and was shortlisted in two categories; Education and Craftsmanship.

As part of the cycle of boarding house refurbishments, Palmer had a complete refit and redecoration as the College continues to provide top class modern boarding facilities. As with many of our projects in recent years, one of the main goals was to improve the social and communal spaces in order to bring people together and build a sense of community. The Common Room was modernised, the study areas were completely re-vamped and the bedsits were redecorated with many gaining upgraded furniture. 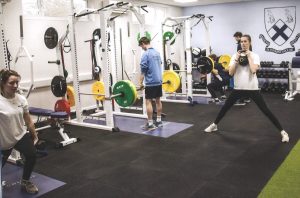 Upon completion of the new Loyd House Common Room, the former TV and Games Room in Crundells provided an ideal opportunity to open up the spaces and create a new Strength and Conditioning suite to provide specialist training facilities for our sports teams and elite athletes. Located in the same quadrant as the Sports Centre and gym, the suite includes a ten-metre runway for a resistance prowler, three weight stations with benches and an elite glute-ham machine as well as racks of free weights, kettle bells, resistance bands and gym balls. Following its official opening in November we have already seen fantastic results, not just in the conditioning of individual athletes but also in squad unity of the teams that have used the facility.

When the Dining Hall was originally built in 1856 it was designed for a capacity of 200 with long tables stretching the length of the building. The College is now home to over 800 pupils as well as a significant number of staff who all eat in that same Hall. The extension is a contemporary space that respects the nature of the existing listed building and is designed to be versatile, allowing the College to hosting meetings, smaller events and presentations outside of meal times. Since opening it in late October the space is increasingly used by pupils as a quiet study space. The new extension has allowed us to increase capacity by around 20% during peak meal times, which is a fantastic achievement. 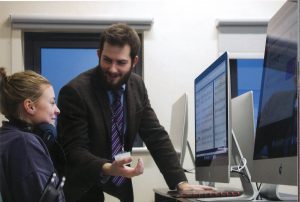 A review of the Music curriculum in Faulkner’s identified the need for incorporation of Music Technology into the learning process. To that end we have completely renovated one of the upstairs classrooms in the Music School which is now home to 12 Apple iMac stations each complete with music writing and recording software, keyboard and mixing controls.

The College Chapel is used on a regular basis for a variety of different services and functions, however the lighting was limited and ineffective. The entire Chapel has now been rewired and has new controlled lighting that can easily be changed to reflect the ambiance of the event. In addition, the visibility of the roof vault and mosaics has been enhanced thanks to a series of feature lights.