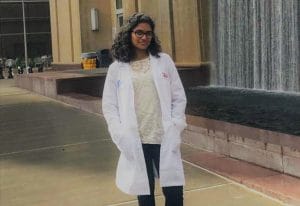 Gloria Prince’s educational experience has been a masterclass in taking opportunities when they present themselves.

Currently studying at one of the country’s top three Medical Schools, the former Bradfield Bursary recipient discusses remote education, taking risks to pursue a medical career and why Bradfield never leaves you.

“If there is one thing that I have become really good at during this period of remote studying it’s how to effectively pressure my siblings into staying still.”

Adjusting to a different style of learning has been challenging for everyone but postgraduate Medicine student Gloria Prince (K14-16) has made the most of being back under the same roof as her family and the opportunities remote education has presented. “One of the things I miss most about university is the practical side but my family are useful models for my clinical studies examinations.”

I DON’T THINK I WOULD BE WHERE I AM NOW IF I HADN’T GONE TO BRADFIELD.

Gloria joins me for a chat on Zoom as she prepares to go back to Swansea University Medical School where she will begin her second year on the Graduate Entry Medicine programme. It is clear from her adaptability during this time just how driven she is to succeed in an ever-changing world, so it is fitting that her path to pursuing a medical career been unconventional. The former Bursary recipient credits her Bradfield experience as key to setting her on this particular journey. “It was only two years, but it really did fly by. It was impactful on my life because I don’t think I would be where I am now if I hadn’t gone to Bradfield.”

Gloria joined in the Sixth Form, having boldly applied to Bradfield after recognising that her then school was unable to give her the development opportunities that she needed to meet her aspirations. It was not all new surroundings however as she did have one familiar face close to her on campus. Her father is one of the legendary chefs in our catering team and having him around was something she and her friends loved. “He would always give us the heads-up about the menus and made sure we had enough at meal times. Of course, there were times when he would get us extra desserts so naturally my friends and I loved having him around.”

Beginning as a day pupil, Gloria quickly decided to go full boarding to cram in as much of the Bradfield experience as possible. “When you arrive there’s so much going on that you end up getting involved in so many activities that you might not have had a chance to do before. Bradfield has given me so many life skills and time management is one of the biggest things I learned.” This is something that she learned the hard way.

By ‘over-immersing’ herself in what Bradfield had to offer, Gloria ended up re-sitting all her AS Level exams in her Upper Sixth year, meaning she took 14 exams in one summer. She found however, that it was this kind of pressure under which she thrived, and points to the support she received thanks to the Bursary as key to delivering a strong set of results. “The Bursary enabled me to do more than I ever thought was possible. It gave me the opportunity to try so many different things, finding new passions that I could carry on later in life and the level of academic and personal support was more than I could have hoped for.”

AFTER-CARE THAT SHOWS JUST HOW MUCH BRADFIELD CARES ABOUT ITS PUPILS.

A career in healthcare was always in her mind as her mother is a nurse and several family members work in the sector but, unsure of what direction to take as the end of her Sixth Form years approached, she decided to gain more experience before applying. Until one message from Polly Caffrey, then Bradfield’s Head of UCAS, changed everything.

“I wasn’t sure I was going to get the grades for Medicine, so I was set on a gap year until Mrs Caffrey got in touch to tell me about a brand-new course and encouraged me to apply through Clearing. If she hadn’t emailed me, I don’t know where I would be. It was a level of after-care that went beyond what I expected which shows just how much Bradfield cares about its pupils, even after they leave.”

Gloria jokes that it wasn’t until she started that degree in Applied Medical Sciences that she really figured out she wanted to become a doctor but she could not speak highly enough of the course. She is now a course Ambassador, going as far as to say those three years were some of the best times of her life and a risk worth taking. Those three years included number of opportunities to broaden her horizons including a cultural exchange trip to Malaysia, Thailand and Singapore, multiple placements within hospitals and also a once in a lifetime six-week research internship in the Department of Surgical Innovation at Baylor College of Medicine, Texas, part of the world’s largest medical centre.

“They were running a global competition for students to find a solution for pressure ulcers. We had to present our solution to business people, research people and doctors and then it went up for an online vote which we won. It is something I’ll never forget and I even used that experience as part of my graduate course application.”

HAVING HAD THOSE EXPERIENCES IT JUST MAKES YOU FIGHT MORE FOR CHANGE.

With three years to go on her current course Gloria is a little way off deciding which route to take in her future career. She does however express a desire to follow a path which has a more immediate impact on people, a desire which stemmed from experiencing serious trauma first-hand.

In June this year, Gloria was in Forbury Gardens at the time of the terror attack.  “We were on the other side of the Lion when it happened. I remember seeing people running, seeing people on the ground and wishing I could help them. Ever since that day I feel I have been more interested in Accident and Emergency so that I would know what to do in serious trauma situations.”

It is not just in her career that she wants to have immediate impact but also her education, and that of future students. Anti-racism movements such as Black Lives Matter have highlighted racial inequalities within the medical community. Having experienced racism and sexism first-hand, Gloria is fighting for change, taking on the role of Treasurer in a newly formed committee for BAME inclusivity looking at the need for increased diversity in Medical Schools.

“I think having had those experiences it just makes you fight more for change. The university has been really open, and we have been working together to increase diversity in clinical teaching. We learn about clinical signs in the profession, but studies are on light skin, so we don’t really know what a lot of clinical signs look like on darker skin colours. We are working to include more race representation in our studies, and I hope to see more of it as I continue my studies.”

Sadly, our time on Zoom is up as she has another group chat set up having recently reconnected with a number of Old Bradfieldians for regular catch-ups. As both the College and her university gear up to welcome pupils back, we hope the next time we meet Gloria it will be to welcome her back in person. For now, we look forward to seeing her flourish from afar as she embarks on her medical career.

BRIGHT FUTURES – The Bradfield Bursary Campaign aims to enable talented pupils like Gloria to have the benefit of a Bradfield education, regardless of their financial means. For more information visit https://www.bradfieldcollege.org.uk/support-us/bright-futures/ and contact the Development office on development@bradfieldcollege.org.uk or telephone 0118 964 4840