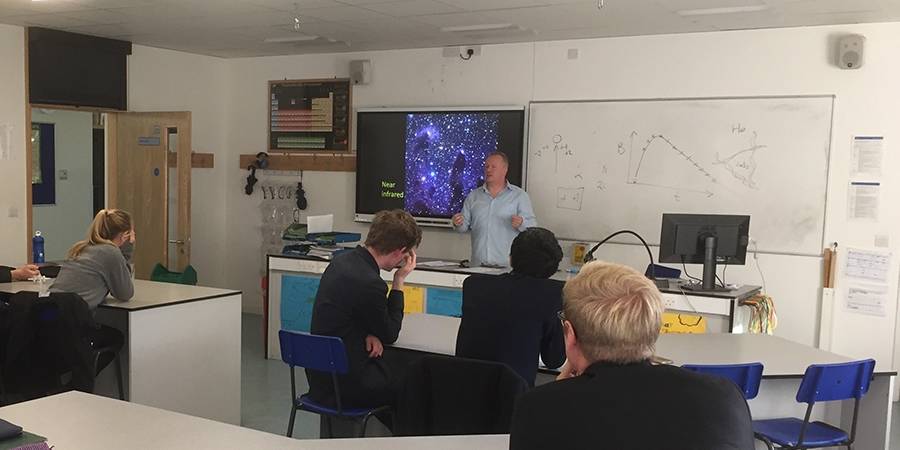 The first talk was given to 100 pupils from several of the local primary schools. Paul told them what it was like to live in space and how astronauts live on the International Space Station. The second talk was given to a select group of Sixth Formers; including two from Theale Green, the local state school Bradfield sponsors. The talk was an introduction to the life of stars, named the ‘Chemistry of Stars’. It was incredibly interesting as it spanned both physics and chemistry. It focused on the birth and death of stars and what characteristics are required to cause neutron stars and black holes. Afterwards, there was a workshop on tracking asteroids using open-source software and data, and how this was being done by schools all over the world.

In the evening, Paul gave the first ever Ryle Lecture. The lecture is named after Sir Martin Ryle, Bradfield’s own Nobel Laureate. Ryle was given the 1974 Nobel Prize in Physics for his work on radio astronomy. The date of the lecture was chosen to coincide with the week that the 2016 Nobel Prizes were being announced.

The lecture, entitled ‘Impacts from Space’, talked about asteroids and described their dangers and possibilities. Of particular note was the interesting fact about the estimated value of some of the known asteroids which was in the tens of trillions of dollars. Paul also spoke about Extinction Level Events and how certain meteorite crater dates coincide with known drop-offs in the number of species on the planet.