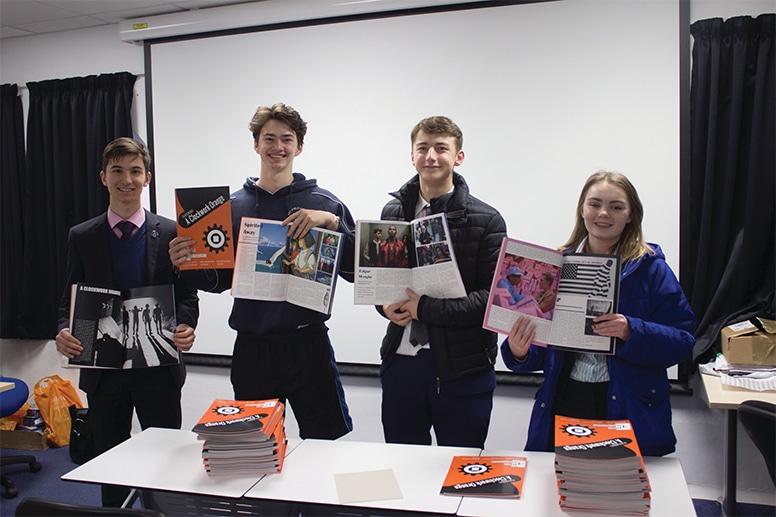 The editor’s of Q5 with the first edition of the magazine.

The Q5 magazine is a pupil created publication that focuses on the exciting world of film and media. An editorial team of four pupils is responsible for commissioning articles and film reviews to passionate film buffs from the pupil and staff body in order to create this very professional and slick annual.

Following the release of the second edition, one of the editor’s of Q5, Hamish, explains the inspiration behind the magazine and his hopes for the future of the publication.

Digging deeper it is the words, the edits, the pictures, the formats, the order and even sometimes the chaos. It is the similarities of font size, font type, title, by-lines, and borders. It is the differences between the pages that make it interesting, exciting and powerful. It is the most rewarding project a pupil could possibly organise in their time here at Bradfield.

The magazine started in the film classroom from which it takes its name; Q5. It started with a group of excited Sixth Formers planning cover pieces, names, catchphrases and titles. It started with myself taking minutes, Tom making decisions, and everyone else inputting ideas far too fast to write them all down.

We’re loving the second edition of the Q5 film magazine. Well done to all the pupils involved with this very professionally done publication. If you see one around campus make sure to pick up and have a read! pic.twitter.com/VK7GDsh6nr

I sincerely hope that the Q5 magazine keeps up its status as the best magazine in Bradfield College. I don’t think it will lose momentum, especially as the new editorial team will have lots of time in the Lower Sixth to organise the project with two years of experience under our belts. To Bertie Kinnings, I wish you good luck. In all seriousness, the magazine is one of quality. It is one that demands respect, and one that doesn’t look out of place with the likes of Empire.

Give it a read the next time you see one lying around. There is something for everyone: film, TV and music reviews, commentaries on the industry, poetry and even controversial topics such as the article on Disney’s less than PG background. The diversity of the magazine represents the diversity of the people creating it, and the quality of the magazine represents the brilliance of the whole team.”

Read the latest edition of Q5