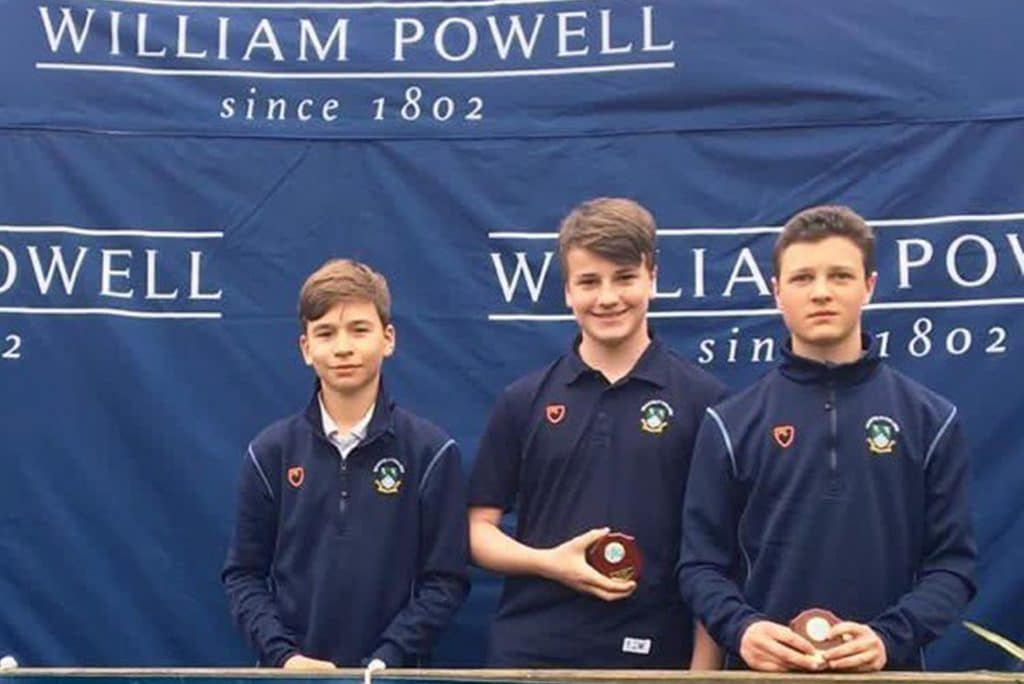 Many congratulations to the Junior Shooting Team of Piers (LE), Charles (LA), Ben (LA) and Tom (LA) who won silver at the William Powell Schools Competition at The Oxfordshire Shooting School in Chipping Norton.

The team finished 12 targets behind winners Millfield and 13 targets ahead of last season’s winners, Bloxham, out of a total of 16 participating schools. The course was shot from eight stands with a good variation of 60 targets.

There was also success for the Senior Team where Aaron Ward (A) finished fourth out of the 79 individual competitors.

Shooting Coach, Sarah Daly was delighted with the results and is encouraged by the progress of the inexperienced team members:

“This is another great result in the last competition for Bradfield College of the 2018/19 year. Once again, the Bradfield teams comprised of some novice competitors with the junior shooters improving considerably throughout the competition season, but all showed commitment and stamina.”

It has been another of year of shooting success, particularly among the older age groups where we continue to get international recognition.

Annabel (J), Max (F) and Katie (M) were all successful in achieving selection to the UK Cadet Rifle Team’s tour to Jersey this summer making up a quarter of that contingent, an amazing achievement.

Congratulations to Cadet Cpls Annabel Morriss, Max Garrood and Katie Hines. All attended Ex Maple Taste for selection to the UK Cadet Rifle team for 2019 and were successful. They will travel to Jersey this summer to shoot against the CI Cadets. Well done and good luck in August pic.twitter.com/Ktufehspja

Hugo (C) continued his development as he represented the GB U19 Rifle Team in South Africa in April. It has been a great 2018/19 in full bore for Hugo. Now X class, he has also shot for Berkshire and has been an Atheling in Canada where he also shot for GB U25 Rifle Team.

Well done to all of our shooters on their hard work and success.

Cadet CSgt Hugo Donovan leaves tomorrow for South Africa to shoot for the GB U19 Rifle team. It’s been a great 2018/19 in full bore for Hugo. Now X class, He has shot for Berkshire, an Atheling in Canada where he also shot for GB U25.Bon voyage good luck and good shooting in 🇿🇦 pic.twitter.com/1jIQ20dBHw