This year’s Greek play Alcestis is significant in a number of ways. Alcestis was the College’s first Greek play and this year’s production is the 40th in Bradfield’s history. By putting on the production just two years after Persae 2017, we have also brought the play back into line with the Oxford–Bradfield-Cambridge triennial – a century long tradition.

To mark this special occasion we have collaborated with Barnaby Brown and Armand D’Angour with support from the University of Oxford’s Knowledge Exchange Seed Fund. Professor Armand D’Angour, who is Associate Professor in Classical Languages and Literature at Jesus College, Oxford has reconstructed the solo songs and kommos especially for this production. Barnaby Brown will also be playing the reconstructed ancient double aulos – the first time this instrument will have accompanied a Greek play since the Classical period.

You can read the story behind the reconstruction of the music and aulos below. 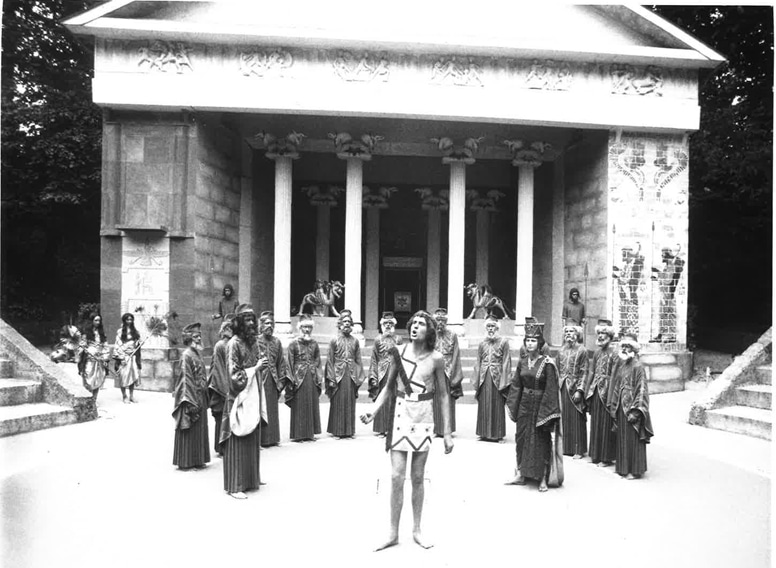 In 1982, Bradfield staged a performance of Aeschylus’ Persae to a musical score composed by the school’s former Director of Music, Christopher Steel. Steel wrote in the programme:

No musical notation survives from the Classical period: the earliest fragments date from 150 BC. This was because most music of Aeschylus’ time was improvised. Any attempt, therefore, at musical authenticity is relatively pointless. The best a modern composer can do is to fit in with the style of the production and to try to capture the flavour of time and place in the drama.

The study of ancient Greek music has made great strides since then. Andrew Barker collected and translated the literary sources in two magisterial volumes (1984–9) and Martin West published his lucid overview, Ancient Greek Music, in 1992. In fact, the earliest fragment of notated music represents part of a Euripidean chorus from 408 BC and the evidence base is substantial, with no fewer than 20 fragments from the Classical and Hellenistic periods (and 39 from the Roman period using the Greek notation system). An edition of these documents was published by Oxford University Press in 2001.

The music of Attic tragedy

The music of Attic tragedy was composed by the playwrights themselves, and the documents of musical notation demonstrate that melodies largely respected the rhythms and pitch profile of the ancient Greek language – the long and short syllables, and the ups and downs for which acute, grave and circumflex accents were invented by Greek language teachers in the third century BC. Precise information regarding scale structures, modes and modulation also survives in treatises written in the fourth century BC.

The most concrete evidence we have, however, is the physical remains of doublepipes (auloi), the instrument which led musical culture and accompanied the singers of Greek and Roman drama. In the past decade, the European Music Archaeology Project has done much to stimulate progress making playable reproductions that carefully respect the evidence. The reeds rarely survive, but detailed information on the traditions of cane harvesting and reed-making survives in the writings of Theophrastus, Aristotle’s successor at the Lyceum in Athens.

Two of the newly-composed sections – the dialogue between Alcestis and Admetus, and the Kommos – are accompanied by a reconstruction of an aulos found at Megara on the south coast of Attica. The original was probably made in the late fourth century BC; it was recovered from a grave in 2005.

A third section, the Child’s Lament, is accompanied by a reproduction of the Koile-Athens plagiaulos, a transverse flute recovered in 2000 from the tomb of a female flautist. Judging by the 400 pots of frankincense found in her tomb, she appears to have had an extraordinary following at her funeral. Both instruments are made of tibia bones and bronze. The reproductions in artificial ivory and bronze were made in 2018 by Chrestos Terzēs at the Hermes workshop in the University of Athens.

As well as being informed by these archaeological finds and by Euripides’ words, our co-composing respects the earliest written evidence concerning musical behaviour in Greek drama, notably the tonal system known as the Aristides scales. In the first section, Alcestis sings in the ancient Mixolydian scale and Admetus in the Phrygian. The Child’s Lament uses Iastian, which was later called Ionian. The Kommos returns to Phrygian and Mixolydian with a short excursion into Dorian for the moment when Admetus recalls their wedding day and the nobility of their two families.

These ancient scale-structures have little in common with their medieval and modern namesakes. Euripides and the composers of his generation were notorious for theatrical modulations mid-piece. In order to execute these more easily on the Megara aulos, we decided to revise the position of one finger-hole (its reconstruction in any case involves guesswork because the original is damaged).

We are grateful to the University of Oxford’s Knowledge Exchange Seed Fund for supporting the production of scores and rehearsal MP3s. These materials are available open access on Figshare, a file management system developed for digital objects that are in flux:

Our latest versions sit on top of an archive of ideas rejected along the way. The single biggest problem concerns breathing: where; how often; and how much time to take. Literary scholars generally fail to take breathing into account. The result is that current thinking on metrics overlooks a vital dimension: like us, the ancient Greeks had to breathe. This is an example of how Knowledge Exchange – two-way learning – benefits academics as well as, in this case, Bradfield pupils and performers anywhere who might want to stage Alcestis in the original language. Our co-composing involved many mistakes as we sought solutions that would be equally compelling to Classicists and musicians, professionals and pupils, scholars and the public.

Open file formats have been shared because these materials are intended to be starting points, not end-points. As the ancient evidence is inconclusive, constant exploration of other solutions is desirable. We will change our minds – new ideas will form as a result of this production and those it seeds in the future. Sam Barrett makes the case for interdisciplinary work of this nature on the Music@Cambridge research blog. He writes:

We have texts that we know were sung, we know that in many cases instruments were used, and we know that instrumentalists were virtuosos whose playing enthralled audiences. To insist on reading these texts without singing them, and on performing them without instruments, is not to retreat into the safety of the known, but to experience them in a way that goes against surviving evidence. 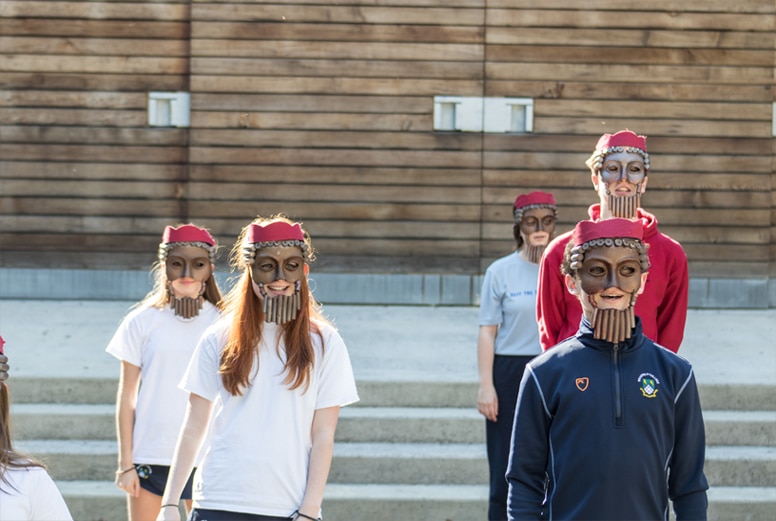 The cast of Alcestis 2019 in rehearsal

We are delighted that the staff and pupils of Bradfield College have joined us on this creative adventure, making new music that is also breaking new ground in the understanding of Classical Greek culture. This is the first modern production of any ancient drama to use a critical reproduction of a theatre instrument of the period – a hyperteleios aulos – and in which the creativity (scholarly and artistic) is rigorously constrained by historical evidence. This discipline is stimulating our imaginations in exciting ways.

A tardis would be required to know if the results approximate any more closely to the sounds that an ancient Greek audience would have heard in the City Dionysia festival of 438 BC, when Alcestis was first produced, but that is not the point. Rather than letting scholarship be an inhibiting source of anxiety, our goal is to inspire active, meaningful, and mind-opening engagement between the present and the past.