Bradfieldians are in it together

In an address near the beginning of lockdown, I mentioned that my father had vivid memories of what he did as an evacuee, but that I never heard him talk about what he hadn’t been able to do during that time. Of course, we all wish we could gather together in person today, but I do not intend to dwell on what we can’t do or haven’t done. As we mark the end of another year and celebrate the achievements of our pupils, there is already far too much to talk about. Indeed, the pupil body has been deeply impressive in numerous ways this term, as it was over the previous two. Looking back over the last year, there are many threads that run throughout it and illustrate the enduring strength of this community. Today is therefore a day for reflection – a day to consider both what has been done and how it has been done.

It is no surprise that the pupil body found its voice so strongly this year as there are many fine voices within it.

It has certainly been a year of change. Living in an age when it sometimes appears that change is the only certainty can be alarming. But so is the prospect of a world that is unchanging and we should be wary of being too comfortable with the way things are: the tyranny of the status quo can see practices endure well beyond the time they should be left behind, and the despotism of custom is frequently responsible for habits we should have broken long ago. It can take a shock to open our eyes to new possibilities or to longstanding wrongs. The growing evidence of climate change was not enough to make the business world embrace videoconferencing, but the pandemic has quickly shown just how many air miles are unnecessary. Worldwide outrage over the murder of George Floyd has made communities question their behaviours, their inequities and their symbols more profoundly than the decades of injustice and systemic racism to which those sometimes testify. 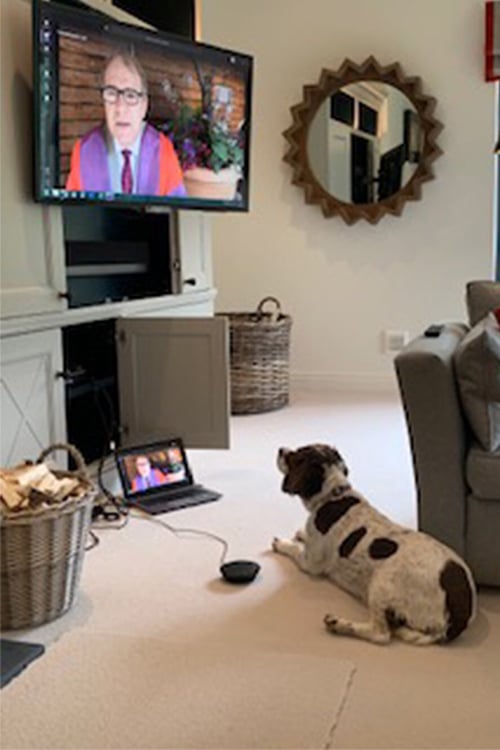 We have so much to learn from the young in these areas. In a year when we have reviewed College Strategy, our Sixth Form pupils led consultation over a new pupil strategy, emphasising sustainability, transparency and equality. Their environmental commitment has also been clear in significant initiatives such as the Phoenix Project, Threads for Change and a food waste campaign. Meanwhile, pupil voice is at the heart of evolving discussions about what Black Lives Matter means for our community and for our curriculum.

It is no surprise that the pupil body found its voice so strongly this year as there are many fine voices within it. The special generation of vocalists leaving us this summer has entertained us quite superbly on many occasions. Moreover, they have taken obvious delight in each other’s excellence. They have given their all and collaborated closely whilst keeping their own distinctive voice.

Our pupils, staff and alumni have been outstanding in their charitable initiatives this year. During lockdown they have volunteered, sung, run, climbed, walked and cycled vast distances for charities, designed cards, worked in testing labs, made PPE, published a children’s book and much more besides. Earlier in the year, pupils supported a danceathon in aid of Hurricane Dorian relief, contributed to a copper trail for the Australian bushfires, gave generously to the Harvest Festival foodbank, gathered books to found a library in a Nairobi slum and, along with their teachers, helped numerous other causes. Nobody chose to move our tribe online in March, but how well pupils and staff have negotiated this. It has not been without difficulties of course, but the resilience shown by so many will stand them in good stead for the future. By the same token, the dividends of greater digital fluency and the independence that online education have mandated are significant. LQ – the ability to learn – will be essential for this generation so greater ‘agency’, or ownership of their own learning, is a real investment for their future.

We know that the Upper Sixth and Fifth Form would have acquitted themselves really well in their exams, as these are two able cohorts who will now gain strong grades in a different way. Deprived of that opportunity to prove themselves in the exam room, many have launched themselves impressively into different opportunities this term. Several of our leavers have shown this to great effect by launching themselves towards the world of work and university. Ollie’s engineering, Molly’s creative writing, Jack’s golf, Liv’s social media work, and Tom’s music, for example, have all opened up career opportunities, whilst a huge array of courses have been completed by their peers, including Languages, Coding, Psychology, Accounting, Excel, Biochemistry, Wellbeing, Interview Skills and more.

The historian, Yuval Noah Harari wrote that ‘If somebody describes to you the world of the mid-21st century and it sounds like science fiction, it is probably false. But then if somebody describes to you the world of the mid 21st-century and it doesn’t sound like science fiction – it is certainly false’. On the threshold of this changing world young people need versatility more than ever. So do adults. How much I admire the teachers who have become learners again this term. Their learning has undoubtedly enhanced their teaching, for, as Thomas Arnold suggested, ‘he is the best teacher of others who is the best taught himself.’ Having suggested a year ago that there is no app for great pedagogy, I have witnessed during lockdown that pupils value the interaction of live teaching very highly. This is not just habit; it reflects the skills of outstanding professionals who have rapidly mastered a different approach to motivating pupils, and new models of engagement and assessment.

A sense of fellowship, common purpose and mutual support courses strongly through this community.

Commitment to the widest possible range of activity continues to typify our pupils as well as our staff. This year has seen representative honours or national finals in hockey, fencing, football and skiing, as well as shooting, tennis and netball. Our pupils have had success in science competitions, poetry prizes, online maths, inter-school debating, and film awards, and they have collaborated in a succession of outstanding concerts and several memorable plays, notably Yerma and The History Boys.

It is evident in these group performances – and not just from the performers but also from their audiences – that a sense of fellowship, common purpose and mutual support courses strongly through this community. This has once again been apparent at large school and House events this year like Goose, House Song, Remembrance, the Dance Show, the Huxham, Christmas Carols, House plays and a fabulous first ever House Dance Competition.

Crucially, our pupils are not just proud of their own performances, they are inspired by their peers and they care about each other. When our footballers have played in a big game or performed in a dance show, when our musicians have sung to a packed house in the Old Gym or, more recently, to a camera, when our Scholars have competed in Olympiads or spoken in assemblies, they have done so with confidence in themselves and in the goodwill of their community for Bradfieldians are in it together not just in lockdown but at all times. Nowhere was this clearer than when Jack sang for his mother in the Michaelmas concert and the audience rose as one to salute his song and his bravery.

Last year I spoke of the difference between personality and character. Character is not only what you believe but what you do: action rooted in the values you hold dear for the good of all. George Eliot puts it beautifully simply in Middlemarch ‘What do we live for, if it is not to make life less difficult for each other?’ Such principles inform not just our pupils’ charitable initiatives but their daily lives. These principles are also the unifying theme of the pupil strategy which seeks to turn pupil voice into pupil action. Helping young people to find meaningful ways to do just that is integral to education. Reflecting on the last year and the generation of young people coming through the College, the words of a recent Tweet by Barack Obama resonated strongly: “I know the past few months have been hard and dispiriting. But watching the heightened activism of young people makes me hopeful.”

Nobody has been more active in helping pupils find their voice and channelling it into meaningful action than our Heads of School. Tom and Alice have led in word and deed. They are multi-talented, but they wear their talents very lightly. They understand anxiety and vulnerability and they embrace the full breadth of the community. They have been ably supported by a really strong JCR and by a year group that has done itself and its College proud. I am deeply grateful to them all.

As I look ahead, I do so with optimism. Optimism that the strategy we are developing will serve the College well as we emerge from lockdown and beyond. Optimism that the College community will regather as strong as ever. Optimism, above all, that the coming generation will look after their world better than its predecessors and look after each other better, too. It remains a privilege to work with them and with you all.

Bradfieldians are in it together not just in lockdown but at all times.

From the October 2020 issue of