From selling food in cars to earning multiple Michelin Stars, Old Bradfieldian restaurateur Phil Howard (H 80-84) has enjoyed a stellar career in the culinary world. The man affectionately known in the industry as ‘the chef ’s chef ’ talks breeding quails at Bradfield, learning from the best in the food business and rising quickly through the ranks to run a successful business.
Steve Wallace, Publications Editor

“If you had asked me who I would most like to be I probably would have said Jacques Cousteau.” Not a line you expect to hear from a two Michelin Star chef contemplating his time at Bradfield in the plush surroundings of his Elystan Street restaurant’s private dining room. As it transpires, the only time Phil engaged with food at school was during meal times to give him the necessary energy to get through his beloved Science lessons, afternoons on the Fives court and breeding animals on campus.

I had to start cooking and I just loved it. Having done none at all at home I got seriously into it. It became an integral part of my being.

“I loved studying the natural world and animals. I was so passionate about Biology that the Head of the Department gave me a CCF Hut in which to raise and breed quails.”

Career guidance was sparse and less creative back then and out of a self-imposed sense of duty to his parents for their investment in his education, Phil felt he should pursue a more conventional route and left to read Biochemistry at the University of Kent.

After a switch to Microbiology, Phil admits he struggled to cope with the workload, eventually gaining a third class degree, but it was during this time where he discovered his real passion in life: cooking.

“University was the first time in my life I felt free. I moved into shared accommodation which meant I had to start cooking and I just loved it. Having done none at all at home I got seriously into it. It became an integral part of my being.”

Graduating meant more freedom and Phil travelled to Australia where he got a job as a waiter. When he had earned enough skills and resources he ventured up the East Coast cooking and selling food out of the back of a VW Kombi to anyone who wanted to buy it.

Upon his return to the UK he got hold of a Michelin Guide and set about beginning his culinary career.

“I wrote a letter to ten of the top London restaurants. I received responses from most and got a job offer from Roux Restaurants. Their empire was massive. They had Le Gavroche and The Waterside Inn as well as a vast contract catering division which was huge.”

The fledgling chef spent a year in the Roux business where he reveals he was thrown in at the deep end in an understaffed environment.

“On the one hand you can say there was not nearly enough training but on the other it was an immediate opportunity to get involved. You had to learn quickly.”

Yearlong experiences followed, first at the world renowned Harveys under restaurant giant Marco Pierre White, who fired him because, well, who hasn’t been fired by Marco, and then at Simon Hopkinson’s Bibendum, just around the corner from his current eatery. While each experience was fairly short-lived they all played a vital role in what turned out to be a well-rounded food education.

“With Roux I saw what finesse and refinement could bring to cooking. Marco was more about flair and creativity and showing that it was possible to cook the best food in London with very limited resources. Simon was the first person I had come across who could talk passionately about ingredients, seasonality and provenance.”

What then paved the way for Phil to become one of the capital’s youngest Head Chefs and restaurant owners was a reconciliation with Marco and a serendipitous return to Harveys.

Marco was in the process of opening a new restaurant when he parted ways with Nigel Platts-Martin, his then partner. Nigel got in touch with a 24-year-old Phil, explaining that Marco planned to take him as Head Chef and asked would he like to go into business.

“I had only cooked for three years at that point. I had never employed anybody, never spoken to a supplier or ordered anything, in fact, I had barely cooked my way around a kitchen. Nigel and I never conversed about setting out any goals or defining the food and I was left to write the menu in its entirety.”

Despite the ridiculousness of the situation The Square launched in 1991. It was a roaring success from the start, something Phil puts down to London’s appetite for change.

I’m not saying we were a temple of gastronomy in the early days but The Square was a very different experience where, on a good day, you would get the best food in London.

“If you wanted to eat a great meal in 1990 you had to go somewhere big, formal, heavy hitting and wildly expensive. I’m not saying we were a temple of gastronomy in the early days but The Square was a very different experience where you could get some of the best food in London!

“There were inconsistencies across the board because we were so stretched, doing upwards of 1000 covers a week, but on a good day you would get the best food in London.”

A first Michelin Star was awarded in 1994 and a second followed four years later in 1998. Both Phil and The Square won a vast array of other awards over the years including Chef’s Chef of The Year and Restaurant of The Year in many guides and publications.

After the economic downturn in 2008 the restaurant scene began to change and while it didn’t spell out the end for The Square it made Phil think a little differently about how he wanted to continue in the industry.

“What customers wanted changed. They wanted the quality but not the formality. As I turned 50, what I wanted to eat changed. Now I want to eat something delicious and simple and, as both a consumer and a chef, I felt I had done my time at the top end.”

Nigel and Phil had a phenomenally tangible asset to sell; a prime location with a good lease and a valuable wine cellar. Everything came together so they sold.

After 25 years you can forgive the man for wanting an extended break, something planned but not executed.

“Foolishly, soon after The Square, I saw this site and thought if I was going to open another restaurant this is the place for me.”

Elystan Street opened in September 2016, a completely different type of eatery to The Square but still very much a place of quality food, earning its first Michelin Star last year.

“The food is still me but it is simpler, cleaner and more diverse. The Square was all about my food and showing the world what I could cook.

“Now I’ve become a little more strategic about it. We really care about the planet, animal welfare and food provenance so we offer vegan starters and main courses and lots of vegetarian dishes.”

Looking back now on a long and successful career, the restaurateur has no regrets about his time at Bradfield, despite admitting that, on reflection, he didn’t embrace every opportunity presented to him.

“The truth is you are in a privileged environment of like-minded and intelligent people who collectively aspire to great things. That kind of learning environment helped me perform in my chosen industry.

“Some schools are easy to categorise as they clone a certain kind of product but I don’t think Bradfield does that. All my peers have gone on to be successful in a broad range of careers and are all genuinely nice people.” 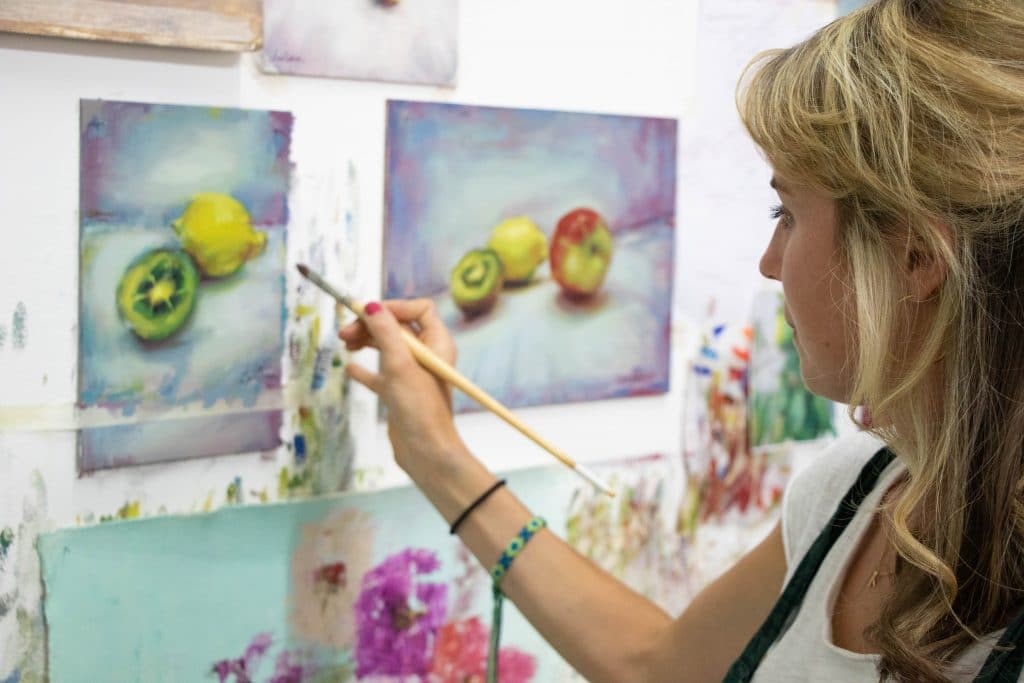 Lara Robinson has learnt her craft in some of the art world’s most iconic settings. Now back in London she is working towards her first solo show in a bid to make her own name as an artist. The Bradfieldian caught up with Lara to find out how she went from Bradfield’s Art Schools to her south-west London studio via Italy and Spain.