Making provision for bursaries was right at the heart of his intent when Rev. Thomas Stevens established what is now Bradfield as St Andrew’s College back in 1850. He decreed that there was to be one ‘Founder’s boy’ – sponsored by the College – for every ten fee paying pupils, referred to then as ‘Commoners’. In 1850 fees were 100 guineas and in addition all fee-payers paid a 10 shilling contribution each quarter to the Domus Fund for the ‘Founder’s boys’ – approximately 2 % of fees. These pupils were to be educated, lodged and boarded free of charge and on equal terms in all respects with the fee-payers. So, from the outset the College recognised the importance of being accessible to the widest cross-section of pupils.

The admissions process of 1856 is laid out in the pamphlet below and the importance of the Founder’s boys to the institution is clear, 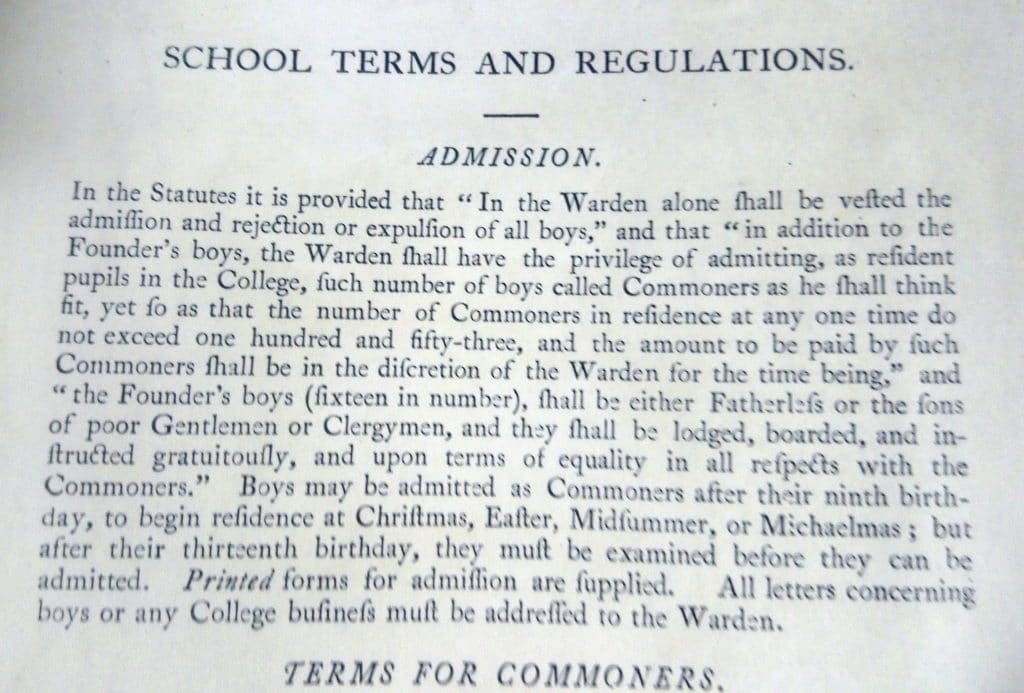 Transcript: ‘in addition to the Founder’s boys, the Warden shall have the privilege of admitting, as resident in the College, such numbers of boys called Commoners as he shall think fit, yet so as that the number of Commoners in residence at any one time do not exceed one hundred and fifty-three and the amount to be paid by such Commoners shall be at the discretion of the Warden for the time being’ and ‘the Founder’s boys (fifteen in number), shall be either fatherless or the sons of poor gentlemen or clergymen, and they shall be lodged, boarded and instructed gratuitously, and upon terms of equality in all respects with the Commoners’.

When founding the school, Rev. Thomas Stevens was not in a position to provide for its future financial security. In fact, his endowment to the school consisted of the land and buildings where the school lived, worked and played and the operating costs had to be met from fee income. Early Council Meetings centred on the financial health of the school, whilst adhering to the requirement to maintain provision for students on a bursary. Saddling the financial burden of non-fee-paying pupils must have been something tempting to forgo given the modest endowment to which the below council meeting of 3 July 1972 attests, but the early Council stuck by their founding principles. 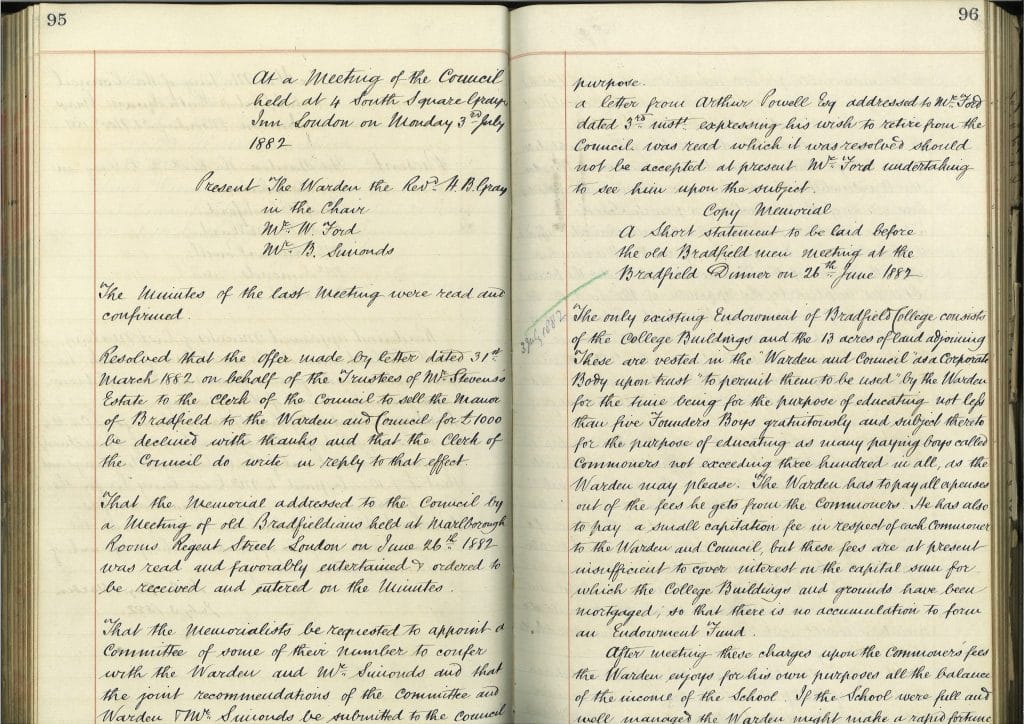 Transcript: ‘The only existing Endowment of Bradfield College consists of the College Building and the 13 acres of land adjoining. These are vested in the ‘Warden and Council as a Corporate Body upon trust’ to permit them to be used ‘by the Warden for the time being for the purpose of educating not less than five Founders Boys gratuitously and subject thereto for the purpose of educating as many paying boys called commoners and not exceeding three hundred in all, as the Warden may please. The Warden has to pay all expenses out of the fees he gets from the Commoners. He has also to pay a small capitation fee in respect of each Commoner to the Warden and the Council, but these fees are at present insufficient to cover interest on the capital sum for which the College Buildings and grounds have been mortgaged, so that there is not accumulation to form an Endowment Fund.

After meeting these changes upon the Commoners’ fees the Warden enjoys for his own purposes all the balance of the income of the School. If the School were full and well managed this Warden might well make a rapid fortune.

Sadly the making of a ‘rapid fortune’ was not to come to pass and there were certainly several ‘touch and go’ moments in the early history of the College, as tough economic times paid a toll on College finances. As the years have passed however the College has benefitted from the support of generous benefactors, who have added to its estate as a result of their personal and collective philanthropy.

A brass plaque mounted outside Hall details the provenance of the various pieces of land that make up the College estate. Many pieces were purchased from neighbouring estates, however significant pieces of land were gifted to the College. Of the gifted land and of huge sentimental and physical significance, is the land given to the College having been purchased with funds raised in memory of those who died serving in World War 1. This land is where the majority of the boarding houses are located, as well as the Sports Complex and the Music School. A great deal of gratitude is owed to these early donors for their tribute to their loved ones. 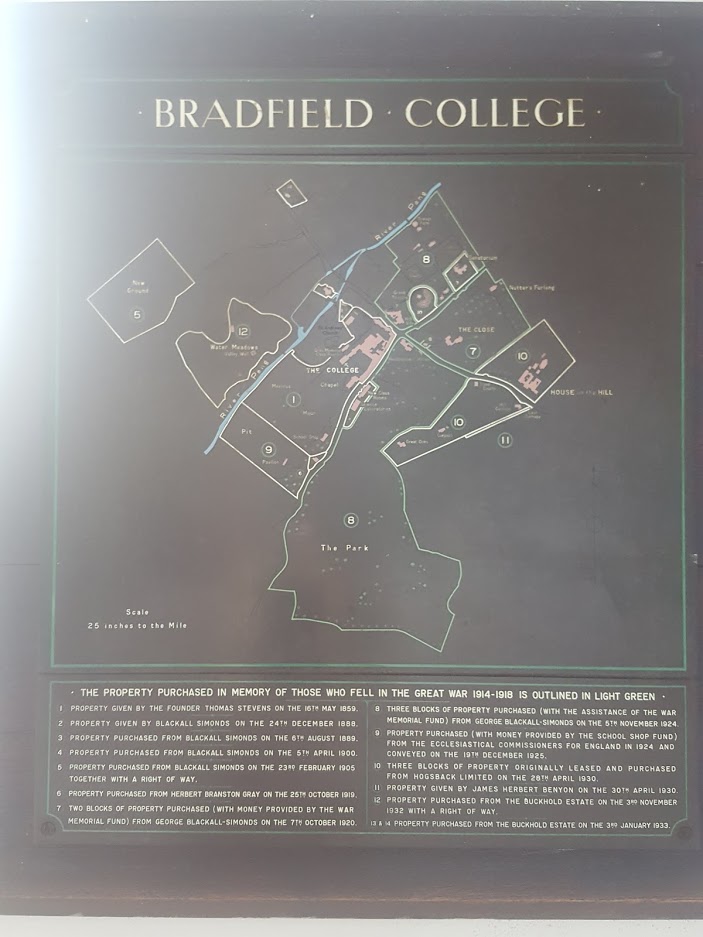 In the 90s the need to invest in the College’s estate became greater than ever, educational economics and expectations had radically changed, and something needed to be done to ensure the long-term future of the school. Ahead of the game in many respects, The Bradfield Foundation was created in 1990, a step subsequently mirrored by many other schools who did not benefit from the financial security provided by an endowment.

The Foundation helped support the College through its improvement and expansion phase, fund-raising for some of the iconic buildings that we see around Campus today, highlighted in red in the image below and including the Greek Theatre, the Sports Complex and the Blackburn Science Centre. Indeed the College would be a very different place without this level of investment. 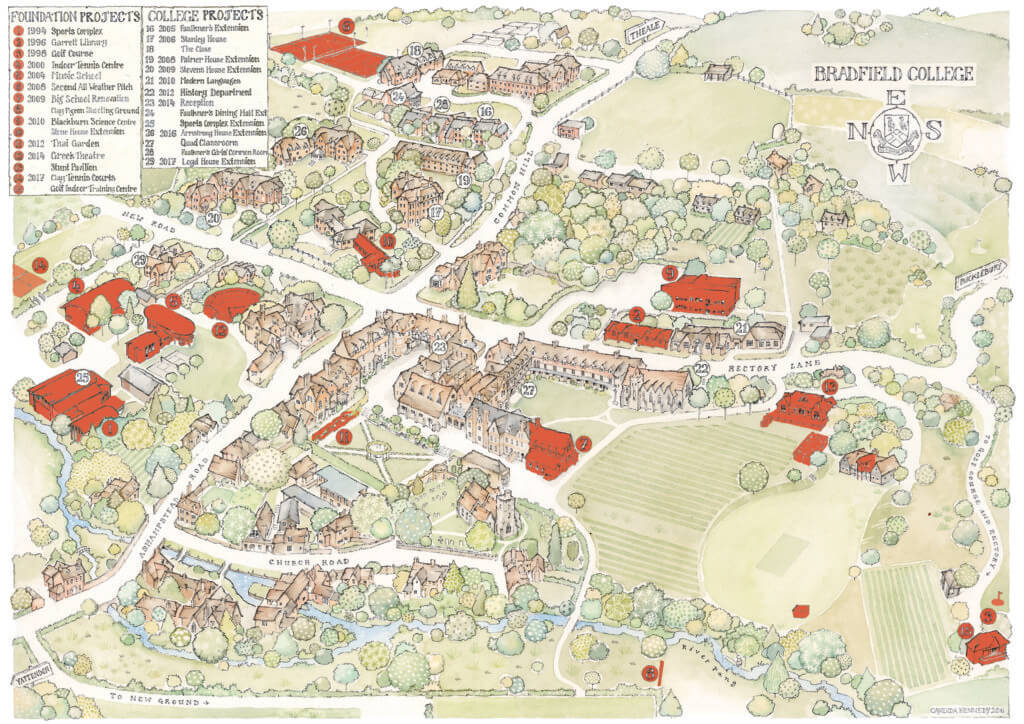 Since its inception in 1990 the Foundation had raised a total just shy of £12 million by 2017, from 12% of Alumni and 19% of parents, former parents and staff, with gifts ranging from £1 to £1.5 million, largely in support of building projects.

In addition to the transfer of operating surplus from the College accounts, significant philanthropic contributions have also been made to the Bursary fund, echoing the importance that members of our community place upon supporting able pupils who would not otherwise be able to afford the benefit of a Bradfield education. Indeed, each year we invest approximately £2million into the bursary fund, supporting around 125 means tested bursaries a year, including 25 awards of 80% or more including 100% support for around 4 pupils via the Royal National Children’s Springboard Foundation.

DEVELOPMENT ACTIVITY HAS HELPED TO TRANSFORM BRADFIELD, ITS CAMPUS AND ALUMNI, AND CERTAINLY UNDERPINS THE COLLEGE’S CURRENT STRONG POSITION.

We are hugely proud of what we have achieved as a philanthropic community so far and we look forward to seeing what we can achieve going forward as we seek to secure a long and successful future for Bradfield College and its Community.