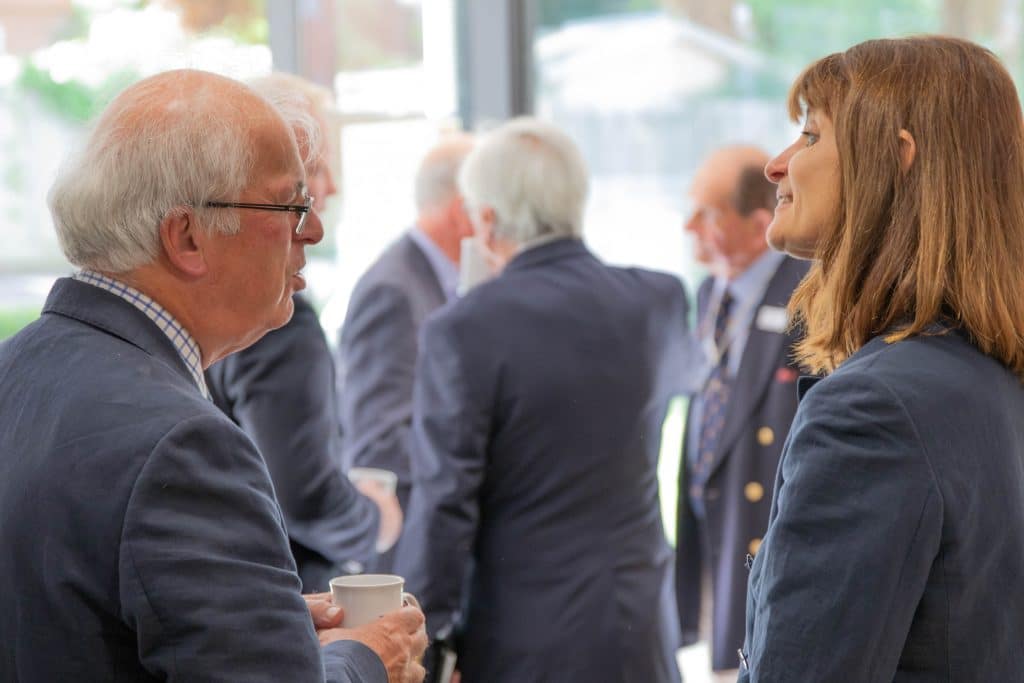 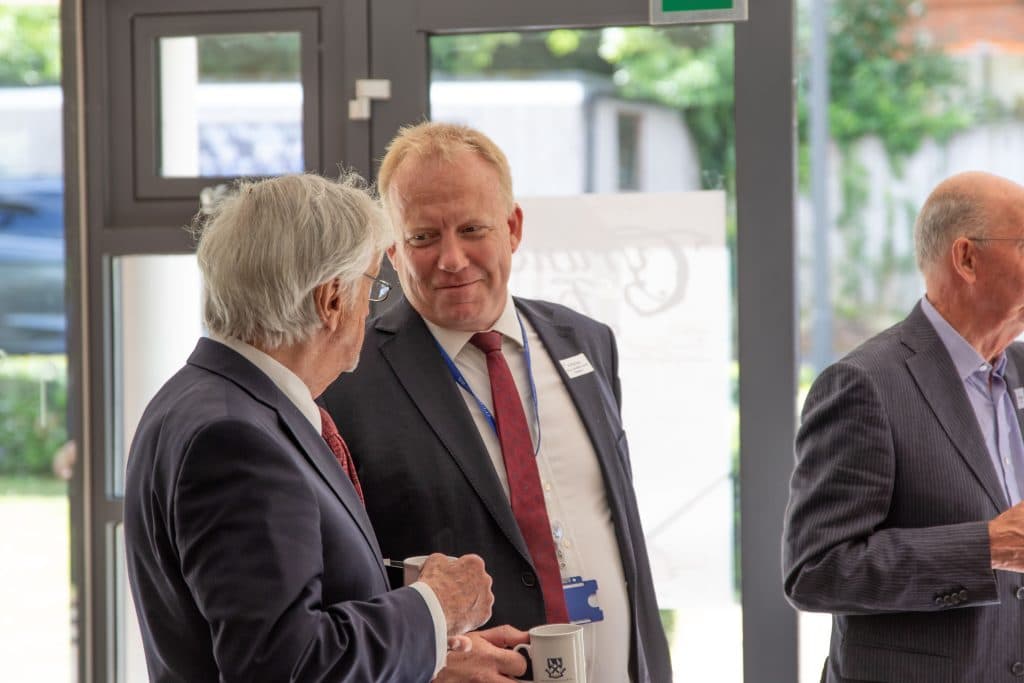 After two long years away the 1850 Society Annual Gathering was back last on Saturday, 25 June. 1850 Society members and their guests initially met in the Music School foyer for refreshments, to reconnect with old friends and make new ones. Although a veteran of Bradfield Society events more broadly, particularly the Waifs, this was the first time Jumbo Fuller (H 51-56) had attended an 1850 Society event and he was joined by his wife Trisha. He reconnected with former bursar Trefor Llewellyn (SCR 07-15) and further links were made. Everyone knew someone somehow. Karen Ward, Bradfield Society Event Manager was there to help meet and greet and enjoyed welcoming the members back to the College alongside Legacy Manager, Katie Green-Armytage who had arranged the event. 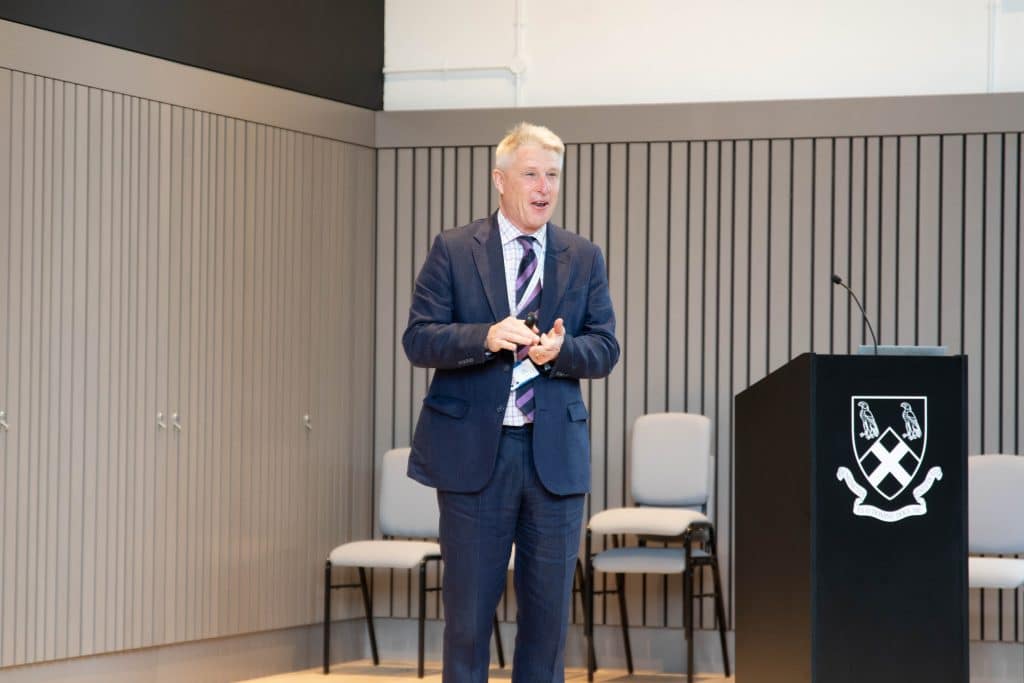 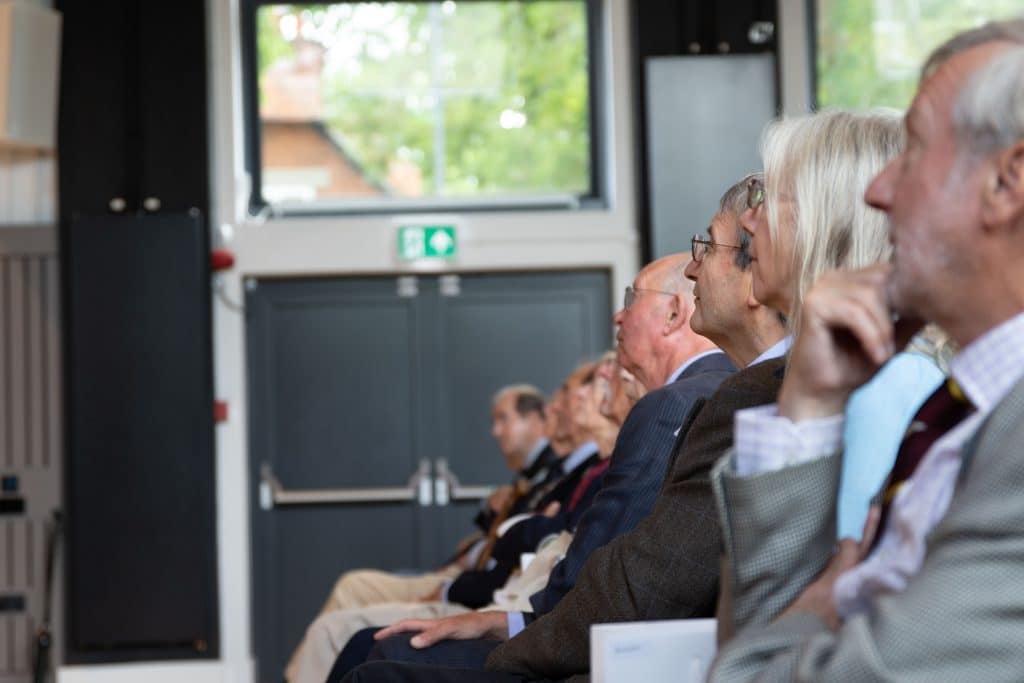 Once refreshed after their journeys the newly refurbished Music Hall beckoned and 1850 Society members were welcomed by Director of the Bradfield Society and Development Al MacEwen. Al explained the ever growing synergy of the Bradfield Society and Bradfield College and the desire for 100% involvement of the Bradfield Community – where the Society facilitates the engagement through events, renunions and the sharing of news and members can share their knowledge and expertise with other members and pupils, to make the whole community stronger. As members of the 1850 Society, who have kind chosen to recognise the College in their Will, they understood that philanthropy is a part of this involvement. Following Al, Chief of Operations Owen Adams presented the campus developments that have taken place over the last 2 years – of which there have been many and the plans for the future – of which there are many more. He spoke of the sound financial planning that has been undertaken by the College to enable all these activities to take place but also underlined the significance of philanthropic support as part of this funding model. 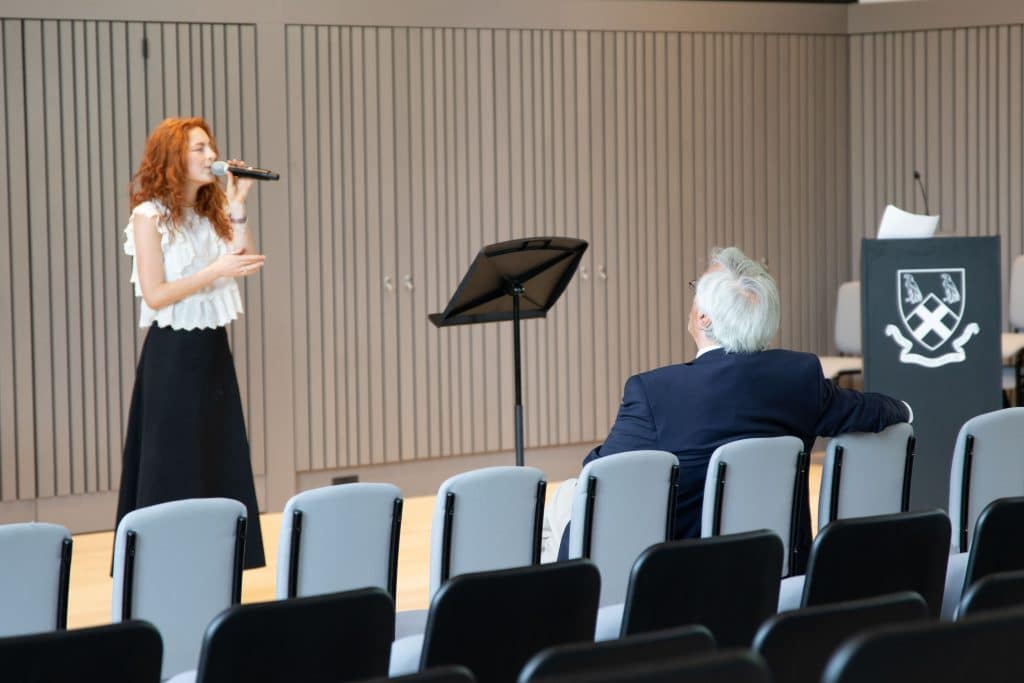 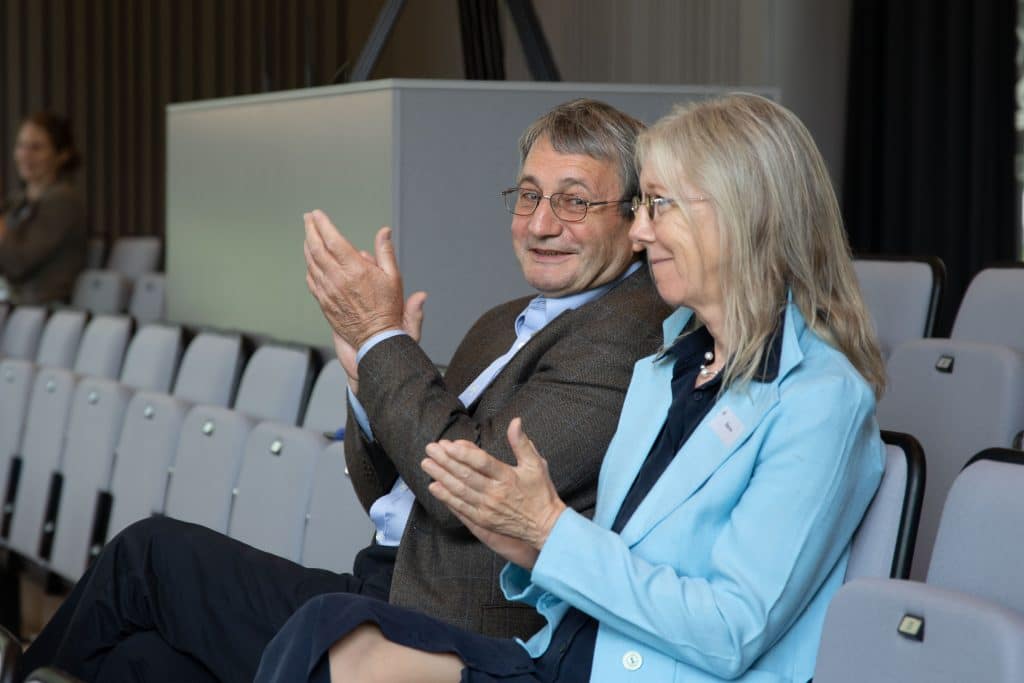 There was then a change a tempo as Matt Lowe took to the stage to speak about music at Bradfield, his presentation interspersed with stunning singing performances by current pupils Lottie, Tallulah and Rosie, all of whom had performed in Jazz on a Summer’s Evening in a brilliant, but damp performance the night before. Where Al and Owen had provided crisp facts and nuanced explanations, the voices of these girls trully delighted the 1850 Society members and they received raptuous applause. John Lyon (C 65-69) and his partner Sharon had attended the Scholar’s Concert at the Jacqueline du Pre centre at St Hilda’s College Oxford, really appreciated the opportunity to hear the girls perform again. They really are very impressive for their age. 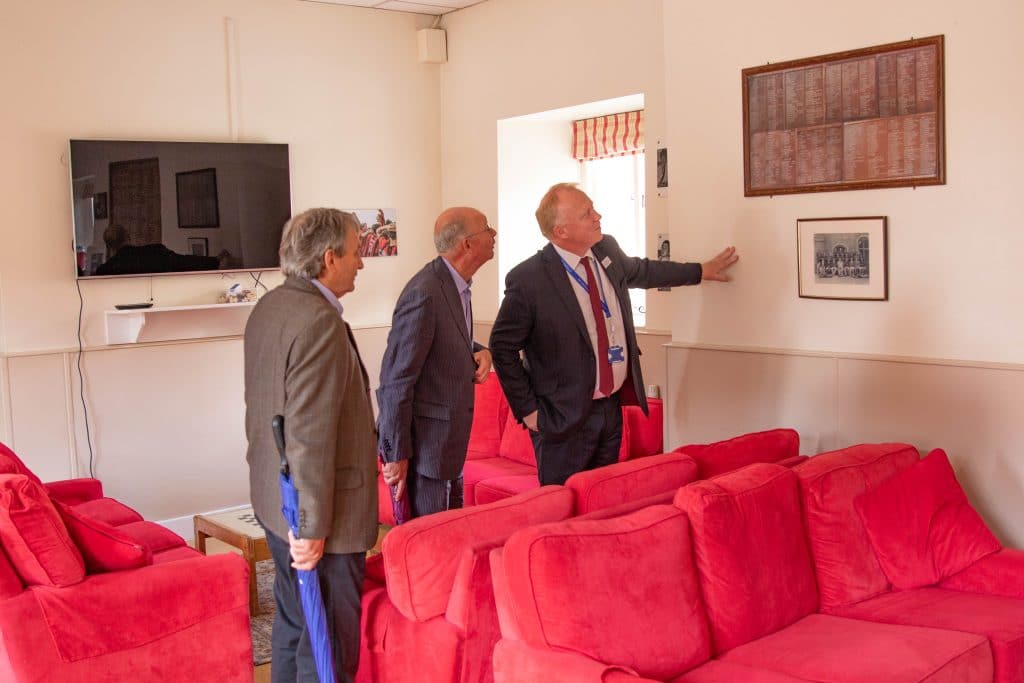 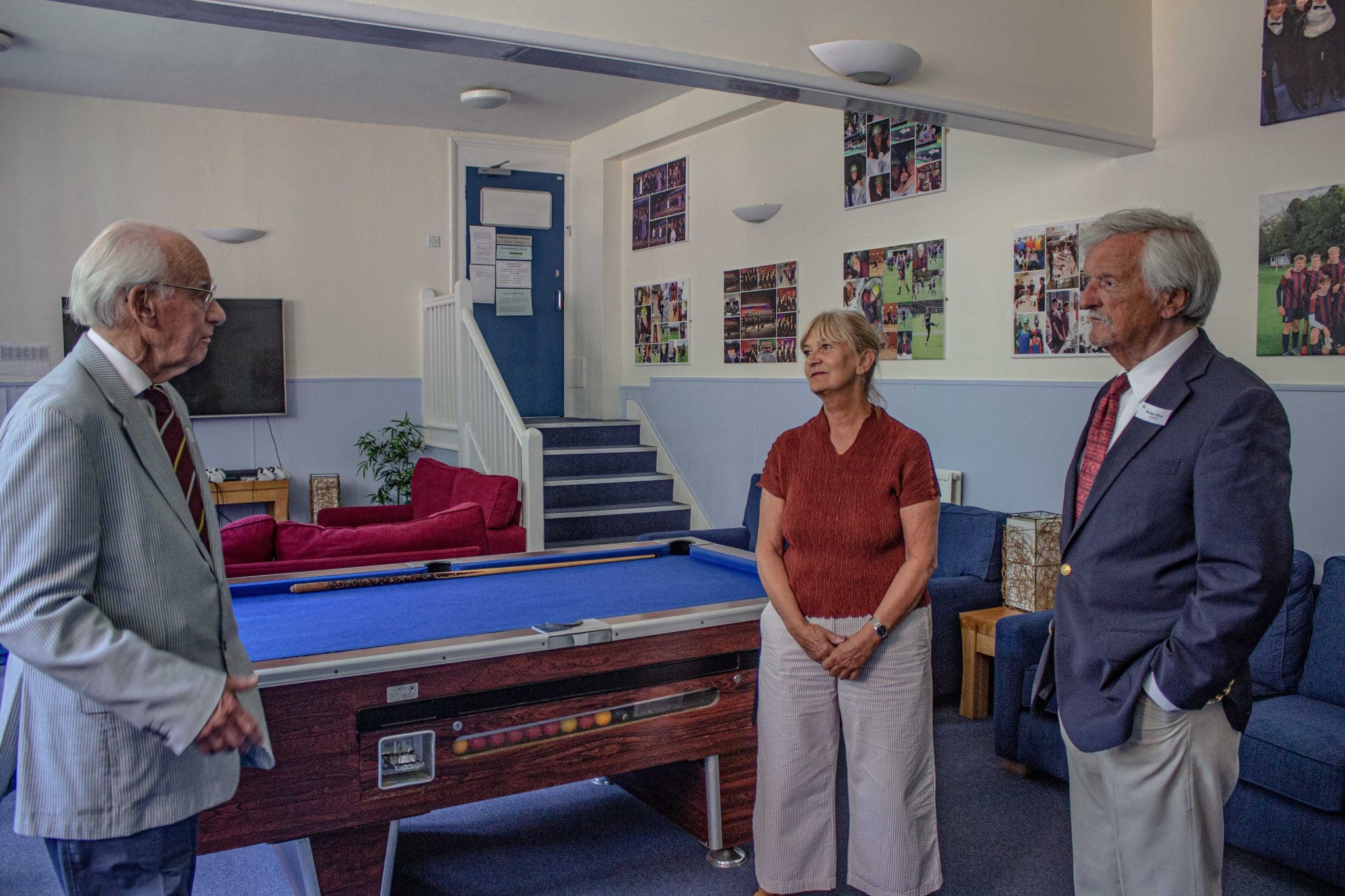 After the comfort of the new Music Hall seating it was time for attendees to get to their feet for College tours. Things never quite go according to plan and this element of the visit certainly did not, so the tour group ended up spliting 3 ways with a duo heading to Hillside, Army House veterans returning to their old haunt and the remainder making directly for the Art Schools, down the hill. In Hillside, Mike Akers (F 48-52) and Robin Elliott (B 54-59) made the most of their small tour group by quizzing House Matron Sandie Ankers about the school lives of current Bradfieldians. Robin is particular was surprised to learn that the CCF still played such a prominent role in College life. In Army House, the honours boards were carefully scrutinised by contemporaries John Lyon (C 65-69) and Tim Rhodes (C 64-68). The remainder were indeed more than satisfied by the Art Exhibition that had been carefully curated by Head of Art and Design Marc Holmes, a destination for all attendees after their house visits. Guests were amazed by the wide variety of opportunities available to explore and were seriously impressed by the skills of the artists on display. 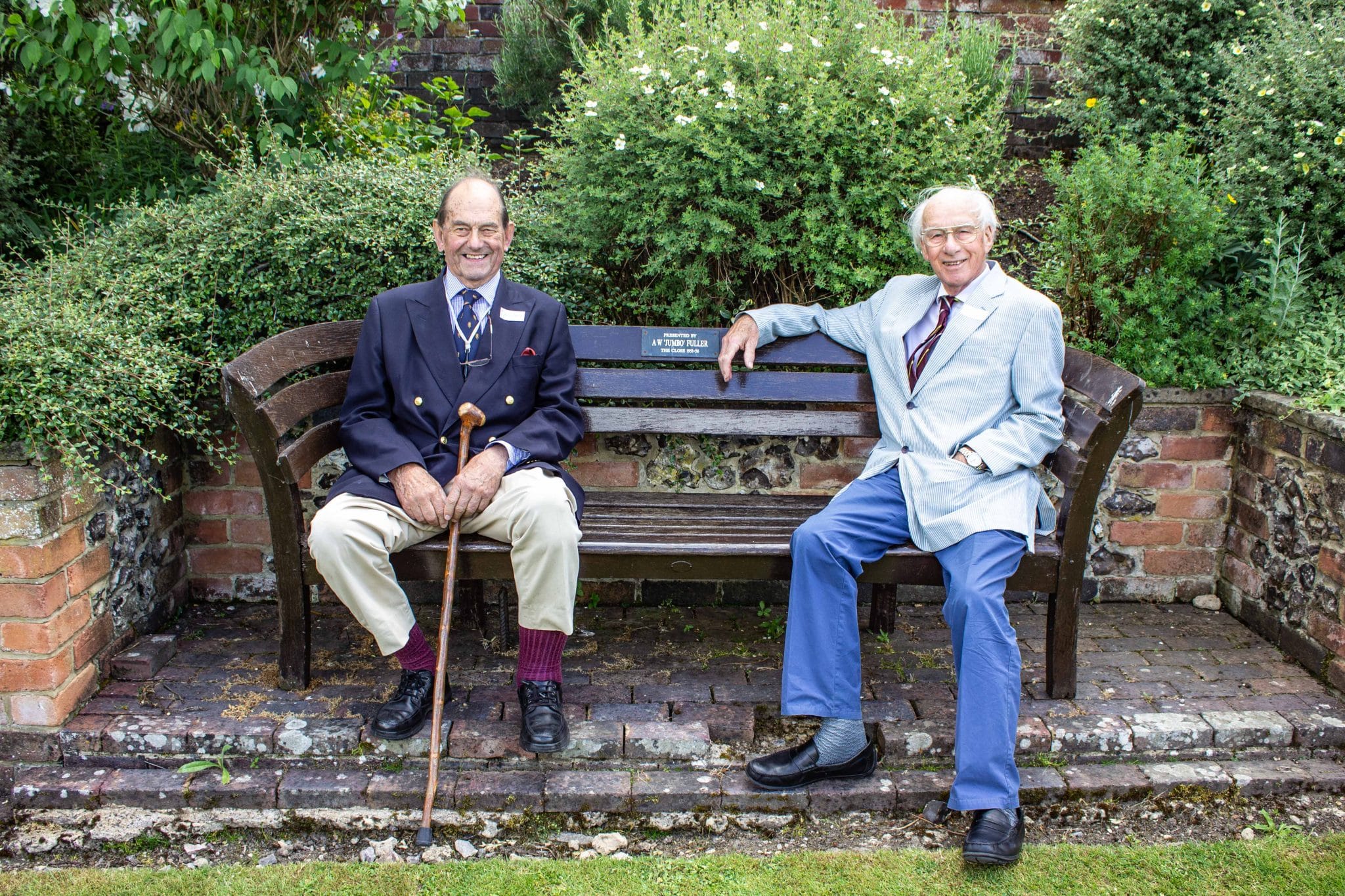 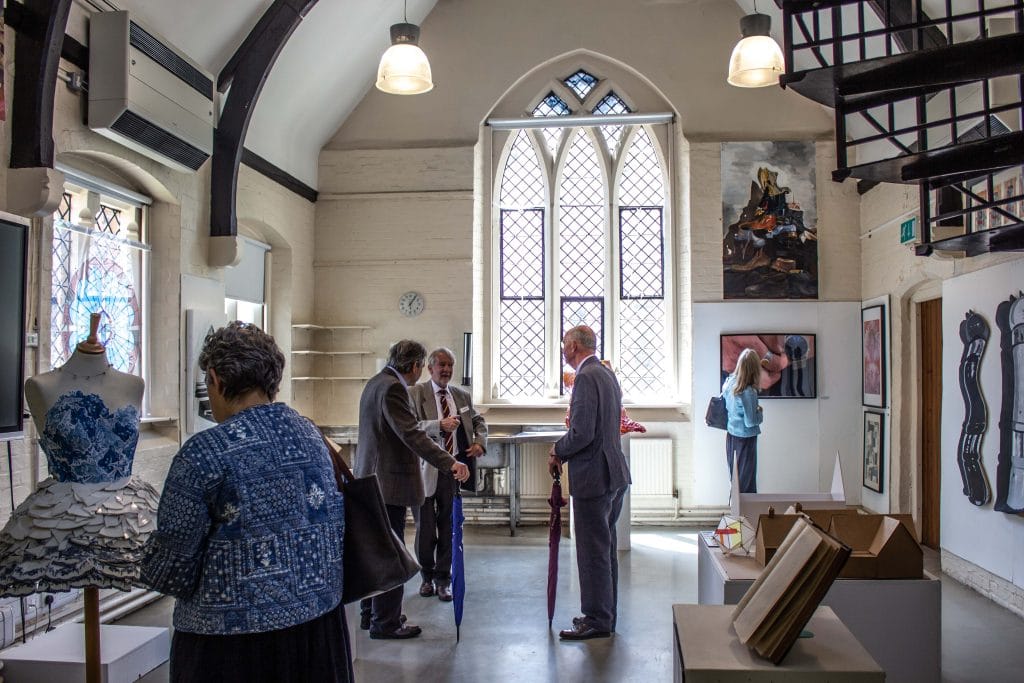 The group then wound its way gently back up the hill through the ‘Sunken Garden’, at its very best at this time of year with all the flowers in bloom. Jumbo Fuller (H 51-56) couldn’t resist the opportunitity to have rest on his bench and was eagerly joined by Mike Akers. A great way to relax and enjoy the hard work of Bradfield’s Grounds team under the guidance of Simon Myhill.

Once in the Dining Hall, attendees were given the full pupil experience and asked to go through the canteen to choose their lunch. Many positive noises were audible as guests took their turn to survey the offering before making their final painstaking decision – would it be pork or singapore noodles and should I go for peppercorn sauce, yes, why not. It might not be good for the cholesterol but it does taste delicious! Colin Burgess (SCR 72-18) enjoyed lunchtime conversation with James Wyatt (G 58-63) and Marion. The Headmaster, Dr Christopher Stevens, also joined the gathering for lunch and gave an impromptu ‘state of the nation’ speech about Bradfield’s current excellent state of health as a school, much to the appreciation of the attendees. 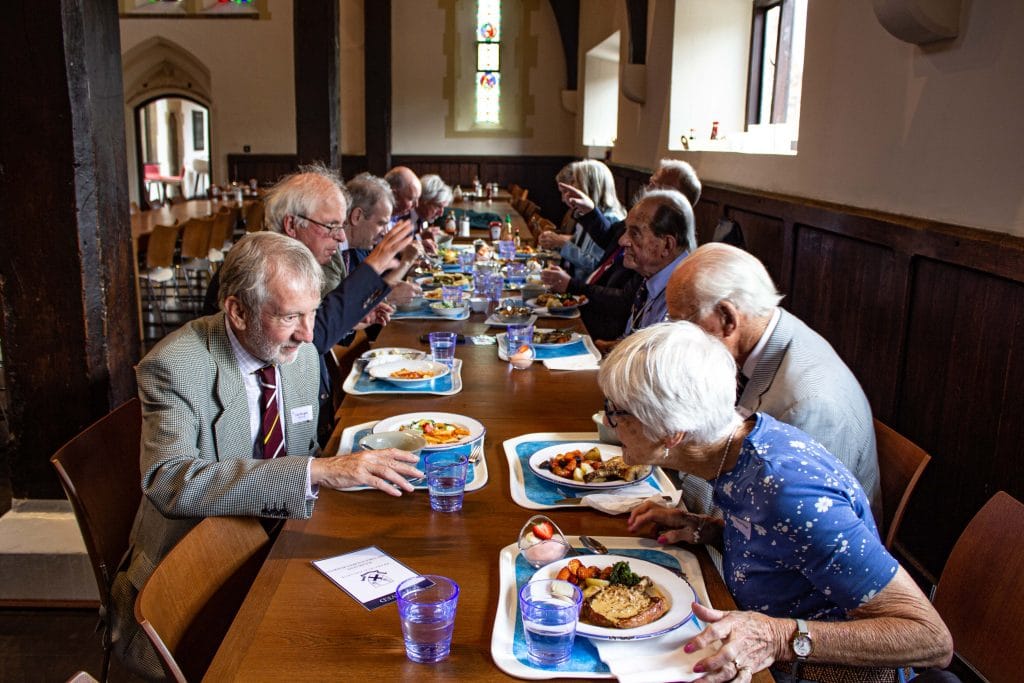 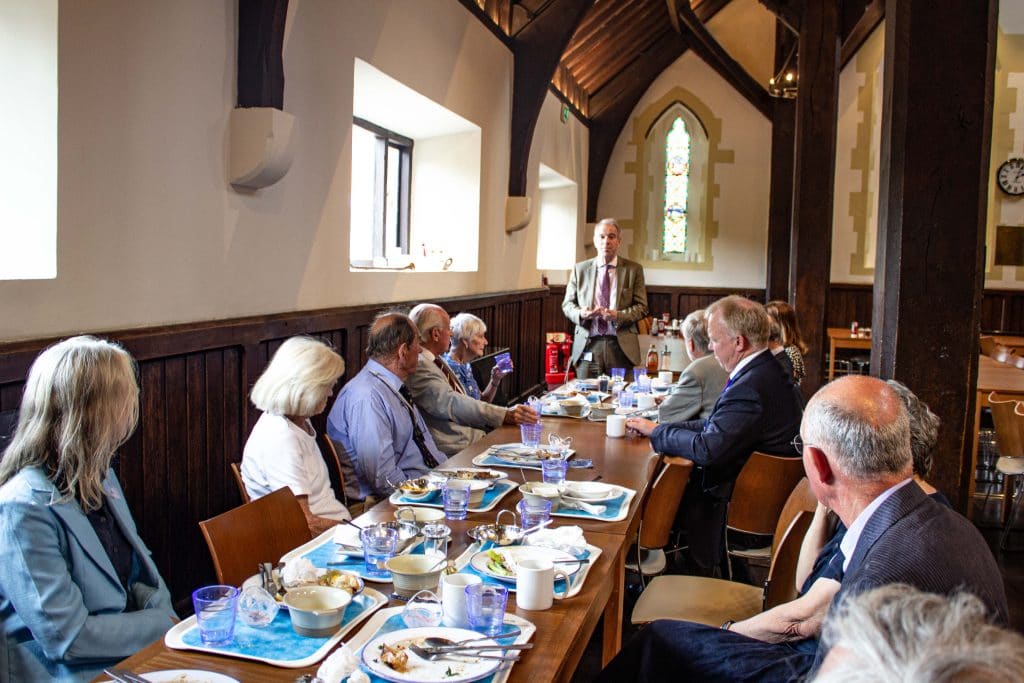 After lunch, an opportunity to work off the calories with a walk out to Pit Bank to watch the 1st XI boys on one side and 1st XI girls on the other side play Charterhouse. Many school time cricketing memories flooded back and Tim Rhodes shared his stories with current Head of Cricket Mike Hill, as his wife Heather looked on and enjoyed the game unfolding below on Pit. James Wyatt chose to watch from his father’s bench, serendipitously located under the gazebo set-up to ward of the light showers forecast for the afternoon. In the event these did not come to pass and instead attendees were treated to a sunny, if not rather breezy, afternoon of sport. 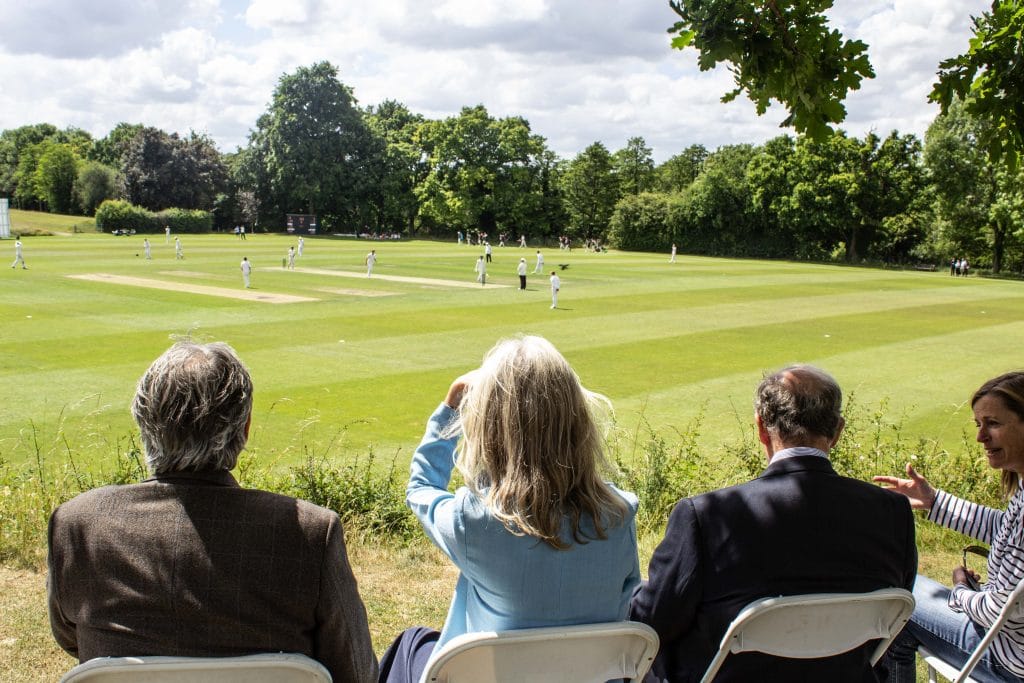 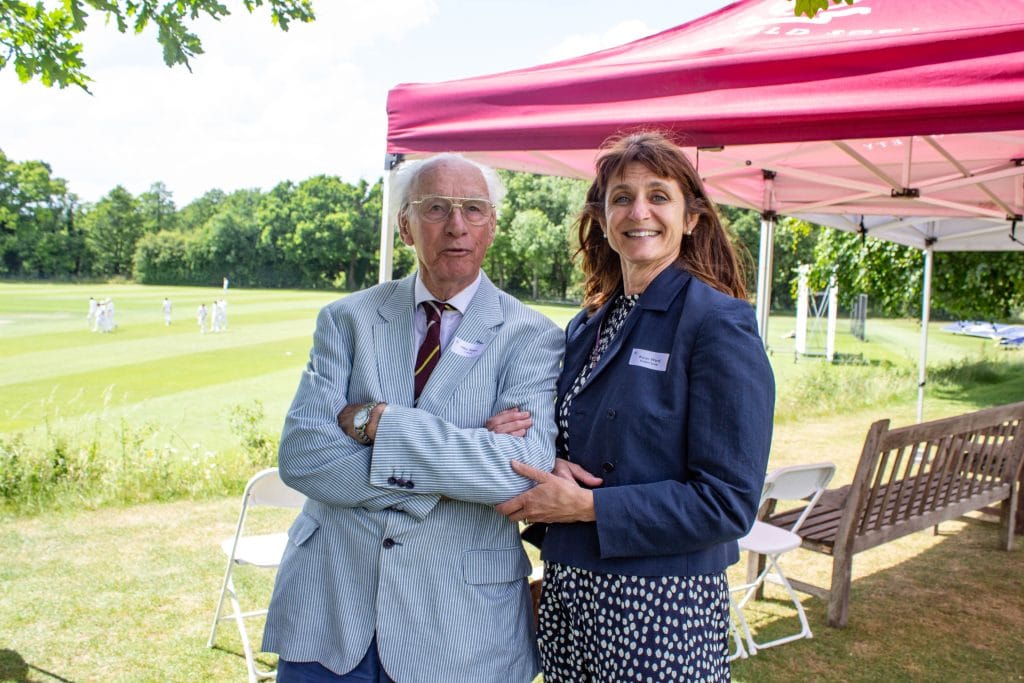 It was a great pleasure to host the 1850 Society after a 2 year gap and we very much look foward to hosting them again next year.

If you are interested in Leaving a Legacy to the College and becoming a member of the 1850 Society do contact Katie Green-Armytage on 0118 964 4840 or development@bradfieldcollege.org.uk