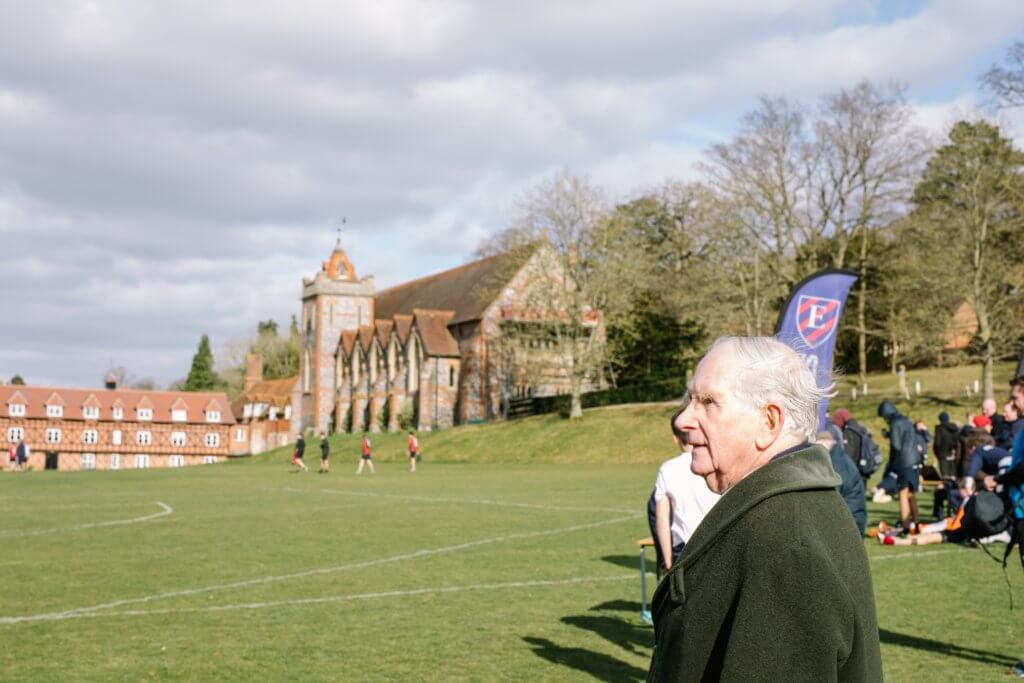 You were lucky if you still had all your running kit intact by the end without it being washed away,” enthuses Robin Salmon(B 44-49), remembering how tough the Steeplechase was as a swarm of mud-covered participants cross Major to complete Bradfield’s traditional running event. “In those days you had to battle against a great torrent of water to make it across the weir pool. There was a cable to help but you really had to hold on as it was almost neck deep!”

While the weir section has been replaced with a more sensible dip in the River Pang, Robin remarked that the run is no less impressive as he enjoyed being a spectator of an event which he won in 1949.

An alumnus of B House, Robin’s return to Bradfield comes almost 70 years after that victory and he is joined by fellow members of The 1850 Society as the College recognises their generosity for donating a legacy.

I hope my legacy can provide that experience for pupils who deserve the opportunity but may not be able to afford it.

“It occurred to me how very privileged I was to be sent to Bradfield by my parents and how fortunate I was to be able to send my three sons here too”, muses Robin as I ask what compelled him to remember the College in his Will.

“With rationing in place, I was lucky that my parents had managed to get enough petrol for the car to make the journey and see me win the Steeplechase. They were pleased to have invested in their sons’ education but not everyone is able to afford to send their children here. I hope my legacy can provide that experience for pupils from a variety of backgrounds who deserve the opportunity but may not have the means to pay for it.”

Bradfield stood out as a marvellous area for natural history in a simply beautiful setting.

The education he received clearly left a lasting impression on Robin and I am keen to find out more about his Bradfield experience. Growing up in Staines, Robin attended the College alongside the elder of his two brothers, joining in September 1944 as the Allied Forces liberated Western Europe during the Second World War.

“Life was pretty tough back then as the War was still raging on. Rationing was the norm and The Blackout was in enforcement but the beauty of Bradfield still stood out. It was a marvellous area for natural history in a simply beautiful setting.” As he takes in those familiar sights, Robin draws on the similarities of the College he attended and the Bradfield of today pointing to the ‘vast and excellent opportunity for sport’ as one of its many attractions.

Alongside his aforementioned running exploits, the Steeplechase winner also played squash, enjoyed fives, tried his hand at tennis, played cricket and turned out for one of Bradfield’s football teams. As if that wasn’t enough, there was one other sport that Robin was able to conquer.

“I became House Flyweight Boxing champion in my first year. It was all carefully regulated; you only had to touch gloves and if, after a couple of blows, it looked to be a one sided fight, it would be stopped.

“You needed temerity when you reached the final as, inevitably, you would be up against an opponent with a hard punch. I had a real humdinger in the 1944 final against a chap called Cotton. It was really tough but I eventually came out victorious.”

The teaching was extremely good and the marvellous characters who taught you really made it.

A true all-round Bradfieldian, Robin also found time to appear as a Florentine page in the 1945 production of Twelfth Night, Mistress Quickly in Henry IV Part 1 in 1948 and enjoyed the occasional trip down the Thames at Pangbourne as was customary for the members of Chapel Choir.

That was only a small portion of what made Bradfield a memorable experience for Robin though as he reflects on what he calls a ‘first-rate academic education that stands out above all else’. “The teaching was extremely good and the marvellous characters who taught you really made it.”

Robin could hardly contain his amusement as he recalled how his Biology teacher had destroyed the Headmaster’s windows when he got a little carried away with a post-war bomb demonstration on the old golf course which blew a rather large hole in the ground.

“He was an Ordinance Officer in the war and used to wear his old ammunition boots and used an old key chain around his waist to hold up his trousers. It was as if he was guarding the Tower of London with all these keys attached.”

I decided to go into the Royal Air Force. It was a very exciting time.

After receiving comprehensive Corps training, Robin left Bradfield and, taking the advice of his father and the Headmaster, studied Medicine at Guy’s Hospital rather than going on to complete his two years of National Service as one would have assumed, before going on to become a House Surgeon and Physician.

“After a couple of years my brother returned from his army service as an MO so, just to be bloody minded, I decided to go into the Royal Air Force. I had a fantastic time and served a three year short service commission. My time included a great posting at RAF Scampton where 617 Squadron had been re-equipped with Mark I Vulcans and one of the senior pilots had been flying Lancasters so it was a very exciting time.”

After his commission, Robin went into General Practice and also completed several hospital secondments in Obstetrics and Gynaecology, Haematology and General Medicine. He also found time to train is Sports Medicine at St Bart’s and was the medical professional for several sports clubs alongside nearly two decades of stints in the Army Reserves and the TA with the Field Hospital and Field Ambulance.

His legacy should be defined by the example he sets for those pupils.

After sending his three sons to Bradfield, Robin enjoyed working as a medical consultant for benefits tribunals and then as a Medical Referee at a Crematorium.

“My role was to make sure that someone was not cremated without a definite cause of death being ascertained. When the time came a few years ago to be revalidated by the General Medical Council, I decided to call it a day. Now I can enjoy being back here at Bradfield where it all began”

My time with Robin is over and as he is whisked away to present the winners medal to this year’s Steeplechase champion I am left in no doubt that Robin’s legacy cannot simply by defined by his generous donation towards future Bradfield pupils’ education. Far from it, his legacy should be defined by the example he sets for those pupils to follow in what can be achieved if one takes advantage of everything Bradfield has to offer.