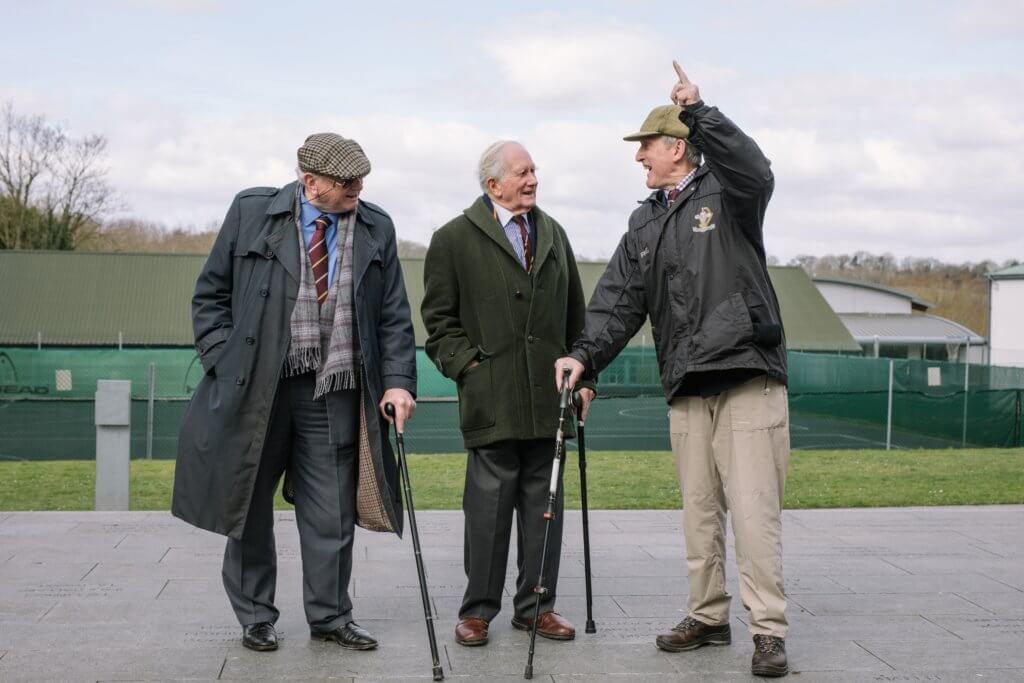 The 1850 Society recognises the generosity and kindness of all those who have decided to remember Bradfield College in their Will. Fundraising Manager Katie Green-Armytage writes about this year’s annual gathering.

I had the enjoyable challenge of organising the first Annual Gathering since the re-invigoration of the 1850 Society last year. But how do you organise an event that does justice to such an important group of people? How about organising it around something that they would remember; a constant in the Bradfield calendar. Why not the Steeplechase?

Choosing this focal point succeeded from the perspective that everyone could remember the Steeplechase but failed to take into consideration that 1850 Society members are an incredibly organised and active bunch and even months ahead many already had alternative plans! I did, however, manage to gather a dedicated group, delighted to have the opportunity to return to Bradfield, witness the Steeplechase, and to experience the College as it is today, on a day-to-day basis, no frills – busy, lively and noisy. They were interested to see the many changes that have taken place and we hoped that they would feel comforted that beauty of the campus and the core values of the establishment remain the same, leaving with the impression that Bradfield is an invigorating and inspirational environment in which to learn.

All the registrants cited the Science Centre as their primary venue of interest on campus, so this became the initial focal point of the visit. The day started with some opening briefs, led by Simon Dixon (C 58-61), 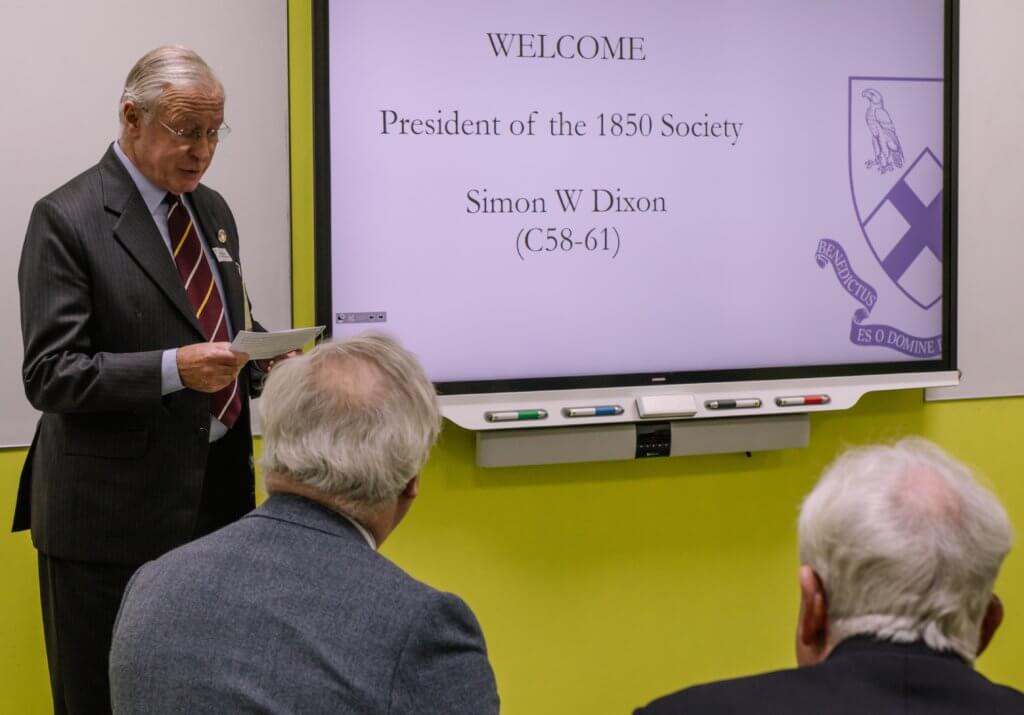 “A big welcome on this my first official engagement as President of the 1850 Society. I took up the role around this time last year to assist with the ‘reactivation’ of the legacy programme and I am therefore totally delighted to be here, with fellow legators, today. At the same time I feel humbled to be amongst such a noble and senior group of OBs. In fact, I think Robin, you arrived at Bradfield the year I was born!”

Which received a rapid retort from Robin Salmon (B 44-49) – “I don’t think it shows!” And that was really how the day continued – with all attendees in great humour and a real pleasure to host. John Muir (G 70-75) and Chairman of the Foundation, spoke about the impact of historic donations, including the ability to support Bright Futures, the ongoing Bradfield Bursary Campaign, and historic building developments already completed. The briefs finished with Paddy Burrowes (G78-83 and Bursar) providing an insight into the campus development masterplan which elicited a great deal of interest and positivity amongst the group.

The schedule for the day then kicked-off with a visit to S9, where Gordon Stead, Head of Physics, was taking an IB lesson on ‘The Spectral Analysis of Gases’ The attendees were mightily impressed with the class. I could not tell whether they were more spell-bound by the change in the classroom environment or the subject matter but either way they really enjoyed the experience.

We then made our way to S6, for a lesson with Dr David Brooks, Director of Science, who had laid out equipment for the attendees to get involved in their own scientific experiment. Faced with a page of instructions, measuring cylinders, pipettes, beakers, different colourless liquids and a stop clock, there was initial confusion. Then, spectacles adjusted and measuring cylinders lifted closer to enable better visibility, the experiment slowly started to take shape. Simon Dixon’s keen mixing produced our first rapid colour change, but who would be next? The competition heated up and even when time was called, attendees kept mixing in search of the perfect result. 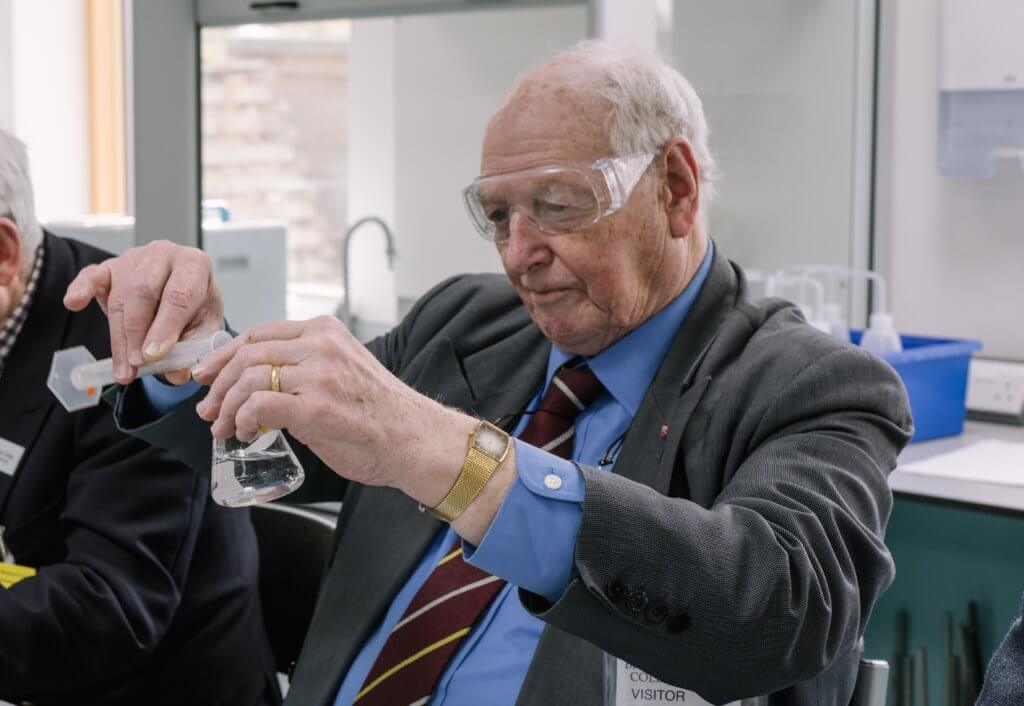 “I regret I do not remember many classes, but I do remember one with a great BANG. Mr Price filled a large glass cylinder with some gases, wrapped it in a cloth, took the end of the cylinder and there was an almighty Bang. All great fun!” said Paul Gray (A 49-54).

Partly in an effort to re-create Paul’s memories Dr Brooks then delivered a lively demonstration that included whooshes, beautiful colours, explosive foams and some surprisingly loud bangs, which fortunately were not heart stopping moments and the group left the laboratory invigorated and enthused by Science teaching today.

John Muir also took the opportunity to sneak out of the Science class (surely not something that he practised whilst at College!) to find the room that he sponsored in the Science Centre in honour of his Housemaster, Chris Saunders. 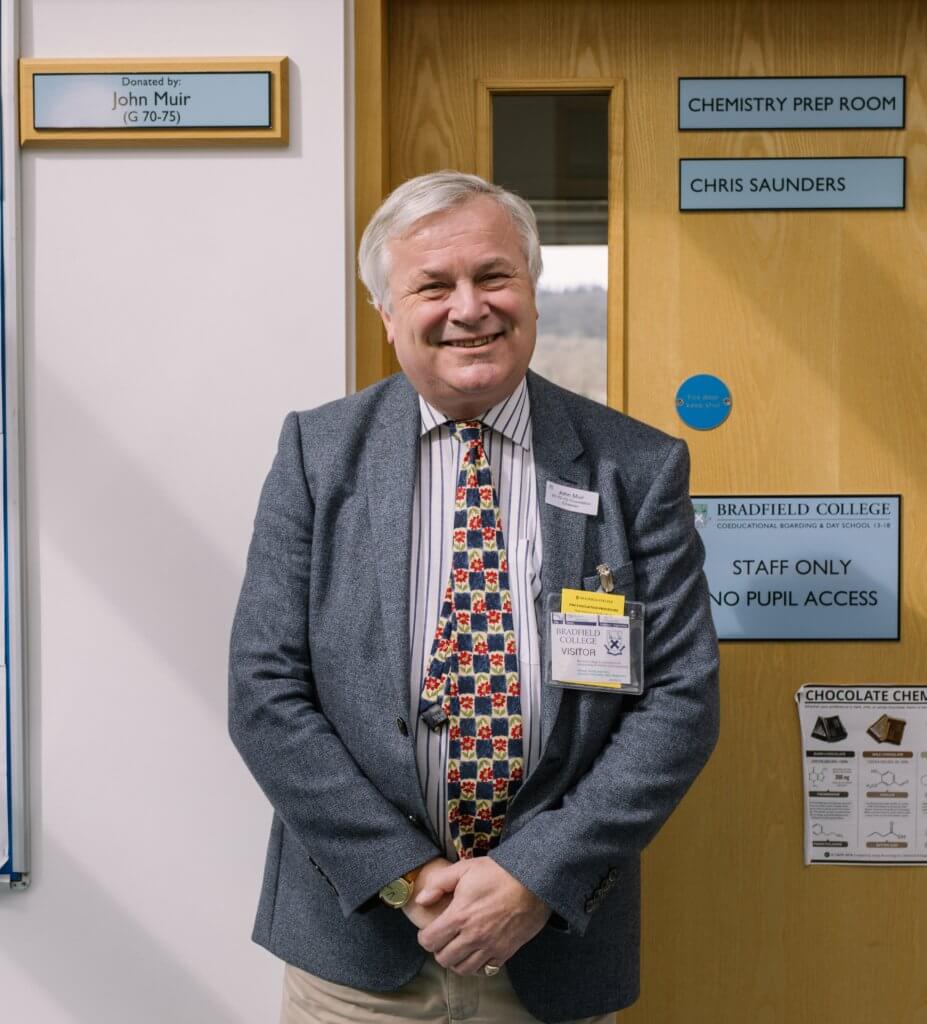 The tour then progressed to the Greek Theatre, where a couple of participants had paving stones laid in recognition of their donations to the Greeker renovation project.

Then, back to Main College and Hall for lunch. Attendees all went through the servery and were very impressed with the wide array of food on offer. “Not in our day, we were on war time rations”, said Robin Salmon. “I distinctly remember the whale meat sausages, not great, but then we were hungry. On Thursdays we had ‘Woolton’ Pie – a vegetable pie named in honour of the Minister of Food, Lord Woolton and on Fridays we had either ‘mock salmon’, aka dog fish or ‘Snoek’ and we really had no idea what fish that was.”

Times have indeed changed as most enjoyed turkey steak marinated in garlic, lemon and rosemary with courgette and carrots followed by Strawberry Shortcake Tart for dessert. Stomachs full, the group made its way to Rectory 3 for the start of the Steeplechase. On watching the pupils as they streamed over the start line, Simon Dixon commented that it was as one might imagine an advance of Mongol hordes – the speed, numbers and noise overwhelming.

Although the wind was rather brisk, spirits remained undented and the 1850 crew enjoyed watching the pupils splashing into the Pang. They refrained from commenting ‘it was much tougher in our day’, mostly I think because it looked like all the runners appeared to be having fun and there was a very positive, ‘we’re all in this together’ spirit around the event.

Ben Hutchins steamed over the finishing line well ahead of the field and Robin Salmon, winner of the 1949 Steeplechase, was delighted to present him with his winning medal. He presented medals to the Senior and Junior boys and much appreciated talking with the boys. John Muir also caught up with G House boys fresh from their exertions. 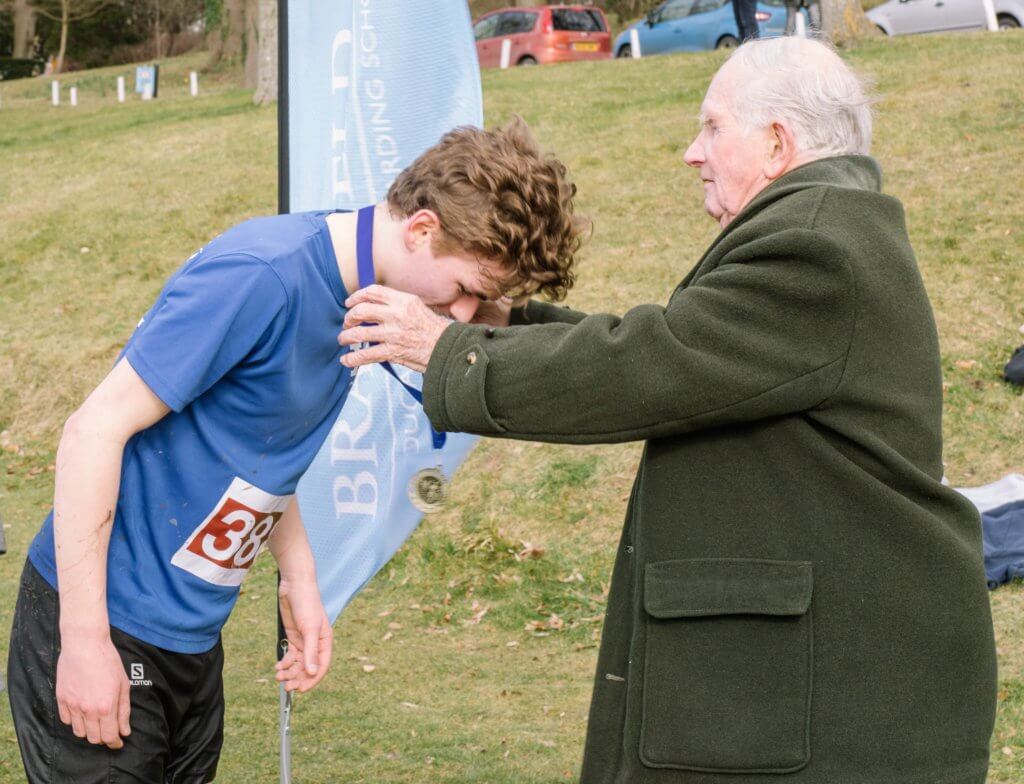 After the tiring business of watching the Steeplechase the final stop of the day was afternoon tea with the Headmaster. Whilst munching their cream tea the 1850s scoured through the archive display – a mixture of pictures of the Steeplechase as well as publications, albums and reports from their time. David Wright (E 48-53) seemed very touched by the research that I had done commenting, “You have gone to so much trouble to find all this information, you even found the album that I donated.”

I am pleased to say that everyone seemed to have a great day and we hope to encourage more existing 1850 Society to attend next year’s annual gathering. The theme will be different, but the sentiment will be the same, to have fun experiencing Bradfield as it is today. It was wonderful that Christine, Simon’s wife, could also join us for the day this year as we warmly welcome family members and friends as guests. 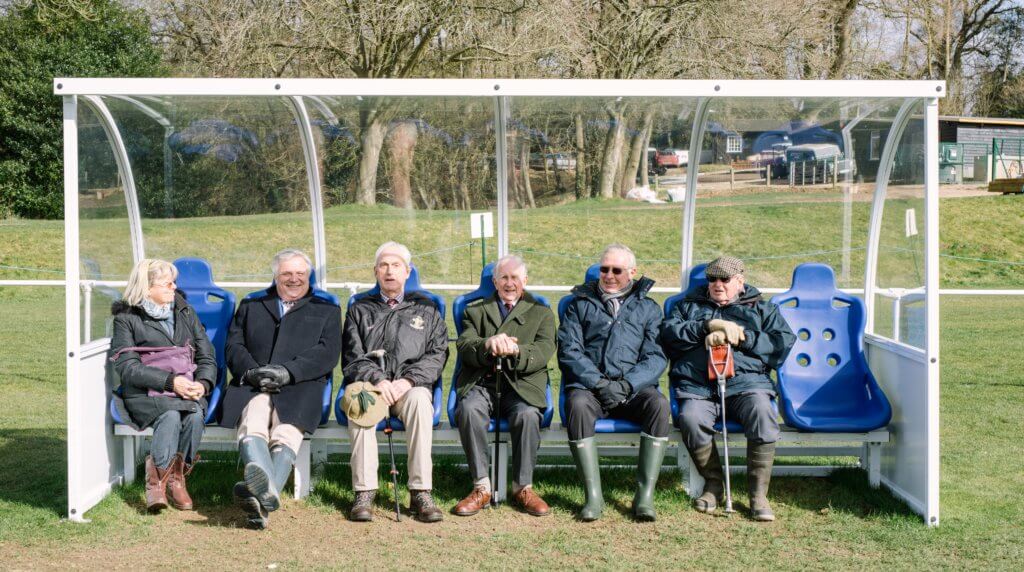 We also hope that in reading this, we might embolden anyone who has kindly already made the decision to leave a legacy to the College to get in touch so that we can add you to the merry ranks of the 1850 Society. Furthermore, for those who are interested in leaving a legacy to the College, the door is always open.