The Close is a senior boarding house of 62 boys. The resident Housemaster, Jo Hanbury, is supported by a team of seven tutors and a Matron, Lisa Bates. 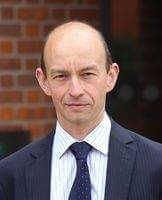 Jo Hanbury was educated at Eton College and then St. John’s College, Oxford, where he graduated in Arabic with Islamic Studies. After university, he joined BP plc., where he held a number of commercial posts over five years, working in the UK and abroad. He started his teaching career at Wellesley House Prep School in Kent in 2005. After completing his PGCE in French and Spanish he worked in the state sector before moving to Bradfield College in 2009.

At Bradfield, Jo has worked as a tutor in Faulkner’s and more recently, as Assistant Housemaster in G House. He was made Head of French in 2011 and has run a number of trips to France. He is more keen than talented when it comes to sport, but he enthusiastically coaches the U15D footballers and U16 boys tennis. He is a DofE assessor and leads annual Faulkner’s expeditions to Dartmoor. He loves playing the piano in the Staff Jazz Band and in his holidays he helps run The Old Stagers amateur dramatic society.

Jo became Housemaster of The Close in January 2016. He is married to Anna (herself a LAMDA teacher at Bradfield) and they have two daughters, Ella and Phoebe.

The Close is a friendly, welcoming House community where the boys enjoy strong friendships across the year groups with prefects playing an active role in pastoral care. The boys are expected to strive for academic and all-round excellence and contribute to House and College life in a wide range of activities. They develop independence, self-reliance and confidence by taking responsibility and applying themselves with sustained commitment.