Armstrong House is a senior boarding house of 70 girls. The resident Housemistress, Alex Cocksworth, is supported by a team of seven tutors and a Matron, Caroline Dandy. 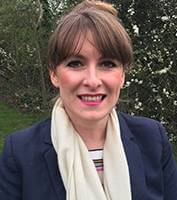 Alex grew up in Kent and was a pupil at The King’s School, Canterbury before going on to study English Literature at Cambridge. After graduating in 2008 she spent some time working in theatre before starting her teaching career at North London Collegiate School in 2010. There she was appointed as Assistant Head of Middle School (Years 7-9) in 2012 and took over as Head of Middle School the following year. She is in the process of completing an MA in Modern and Contemporary Literature at Birkbeck University.

Alex loves writing of all genres and has had some poetry published as well as producing more journalistic work for various outlets on the topics of education, feminism and literature. Alex is also an enthusiastic blogger reviewing new works of fiction and offering her literary opinion on her own blog. Her husband Ryan works in public relations in London and they have a one year old daughter.

Armstrong House is the smallest girls' House so the atmosphere/ethos is cosy and welcoming, with all the girls knowing each other very well as a result. My personal motto is: 'Take responsibility,' as I firmly believe the girls should do just that; ranging from the mundane tasks of making their own beds to the more serious tasks of meeting their work deadlines. Each girl is encouraged to play to her own strengths, to make the most of all the opportunities offered her and is expected to aspire to be the best that she can be in all areas of school life.