Stevens House is a senior boarding house of 66 girls. The resident Housemistress is Charlotte van der Westhuizen, who is supported by a team of eight tutors and Matron, Susan Thornhill. 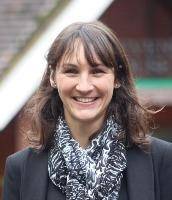 Charlotte grew up in South Africa and gained her Masters degree in Mathematics at Stellenbosch University before joining Groote Schuur High School, Cape Town, in 2007. She joined the Bradfield community in January 2012. Before becoming Housemistress of Stevens House, Charlotte was a deputy Housemistress in Stanley House.

Charlotte supervises DofE expeditions, is a member of the Swinbank Society and is a sports enthusiast. Apart from coaching netball and tennis, she is a keen runner and has recently taken up golf. She also enjoys reading, travelling and experimenting in the kitchen. Charlotte is married to Johan and they have two little girls, Katryn and Lia.

Stevens House is a welcoming community where we celebrate each other’s successes and support each other through difficult times. As a house team, we encourage every girl to make the most of the opportunities presented to her at Bradfield. We believe that a positive attitude combined with hard work and perseverance can help pupils to achieve, and even exceed, the targets they set themselves, whether it be in the classroom, on stage or on a sports pitch. We strive to help our girls develop into happy, sensible and self-confident young women who can make a difference, not only in their own lives and current community, but also in the world outside Bradfield.